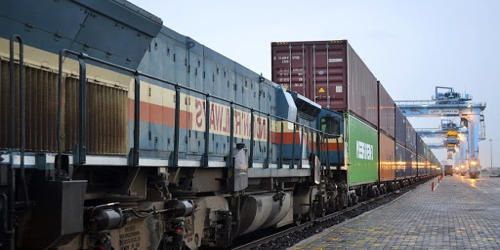 Railway Receipt (R.R) means the receipt issued by Railway Administration on acceptance of goods and which entitles the consignee to the delivery of the goods at the Rail Terminal at which the train terminates or destined. It refers to a document, which the railway company gives to the consignor acknowledging the receipt of the goods for carriage. It is a type of bill of lading, is an acknowledgment of goods received by the Railway Authorities for carriage to a specified place of destination mentioned therein. The property in the goods covered by a railway receipt passes by endorsement and/or delivery.

It means the receipt issued by Railways on acceptance of goods and which entitles the consignee to take delivery of the goods at the terminal at which the train terminates. It is a receipt issued by one of the officials of the railway, when goods are sent by rail. It shows the quantity of the goods to be transported and the amount of freight to be paid. It is a document of title to the goods. This receipt is proof that the railway official has received the goods mentioned in the receipt on a particular date for sending them to the desired destination. The number and date of Railway receipt, Bill of Lading, Air Way Bill or Consignment Note under which the goods charged for in the bill are dispatched by Railway, Ship, Air or Road respectively, and the number and date of the letter with which such Railway Receipt, Bill of Lading, Air Way Bill or Consignment Note is forwarded to the consignee should be quoted on the bill. As in the case of a bill of lading, every transferee who derives the title from the previous transferor takes it subject to the defects which the transferor himself had.

The receipt contains the following information :