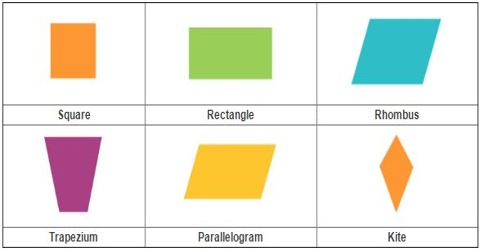 A quadrilateral is a closed figure with four straight sides. Each point where two sides touch is called a vertex. Simple quadrilaterals are either convex or concave. There are special types of quadrilateral:

Rhombus: A rhombus is a four-sided shape where all sides have equal length. It is quadrilateral with four congruent sides; a rhombus is both a kite and a parallelogram.

Square: A square has equal sides and every angle is a right angle (90°). it is a quadrilateral with four congruent sides and four right angles; a square is both a rhombus and a rectangle

Parallelogram: A parallelogram has opposite sides parallel and equal in length. Also opposite angles are equal. It is quadrilateral that has two pairs of parallel sides

Kite: It has two pairs of sides. Each pair is made up of adjacent sides (they meet) that are equal in length.