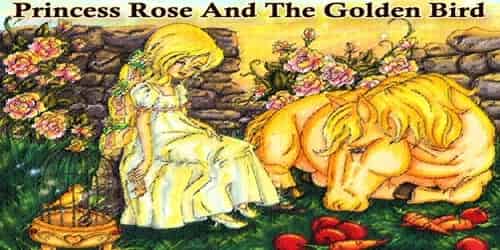 Princess Rose And The Golden Bird

Many, many years ago, in a kingdom far, far away there lived a beautiful princess. She had long red hair and loved roses so much that everyone called her Princess Rose. Every evening after dusk, Princess Rose went out on the balcony and clapped her hands. A golden bird came flying out of nowhere and alighted on her shoulder. Instantly, the princess’s hair began to shine, ablaze with the brilliant red light.

When the bird started to warble an enchanting tune, Princess Rose joined it in a song, and everyone in the kingdom fell asleep and had sweet dreams till the break of dawn.

Thus passed the years. Every evening Princess Rose, along with the little golden bird, sang a loving lullaby, so that all people fell asleep and had sweet dreams till the break of dawn.

Until one day something terrible happened. A wicked witch learned about Princess Rose and decided to curse her. “Abracadabra, Sim-Sala-Bim, may the rose’s color dim!” the witch said, and Princess Rose’s hair instantly turned as black as tar.

That evening, too, Princess Rose went out on her balcony and clapped her hands. But when the golden bird appeared, her hair glowed black instead of red. The bird warbled its enchanting melody, and Princess Rose sang her lullaby.

Everyone in the kingdom fell asleep, but that night they only had bad dreams and nightmares.

On the following day, the saddened princess asked the bird, “Tell me, golden bird, how can I make my people’s dreams so sweet again till the break of dawn?”

“Black hair in rose water,” the bird chirped in reply.

The princess wondered at this counsel but abided by it, nevertheless.

She filled up a basin with water and sprinkled rose petals on its surface. Then, she dipped her hair into the rose water, and it instantly turned red again.

That evening, when the bird perched on her shoulder, the radiant red glow of her hair lit up the night sky once more. The Princess sang her lullaby, and everyone in the kingdom fell asleep and had sweet dreams till the break of dawn.

The wicked witch was so very angry that her curse had been broken that she decided to cast it again.

“Abracadabra, Sim-Sala-Bim, may the rose’s color dim!” And the princess’s hair turned as black as tar again.

Only this time the witch also picked up all of the rose blooms in the entire kingdom.

“Let’s see how you’ll break my curse now!” she sneered, filled with rage.

Once again, the saddened princess asked the bird, “Tell me, golden bird, how can I make my people’s dreams so sweet again till the break of dawn?”

“Black hair in rose water,” the bird chirped in reply.

“But where should I find a rose?”

“Black hair in rose water,” the bird chirped and flew away.

The princess didn’t know what to do. So great was her anguish that her eyes filled with tears, one of them falling to the ground below. At that very moment, a young and handsome prince, who had stopped under the balcony of the princess, took out a little box and a single red hair from within it.

He bent down and placed the hair atop the princess’s tear. And then, a miracle happened. Suddenly, the red hair turned into a red rose.

The prince picked the rose and took it up to the princess. Upon seeing the rose, she immediately brushed off her tears and plucked its petals to add to the water in the basin. Then, she dipped in her hair, and the curse was broken. Everyone gasped in astonishment, and the King asked the prince, “Young man, where did you find that red hair?”

“When the princess and I were both children, I picked a single strand of hair from her head as a sign of my loyalty to her. And she did the same to me, pulling out a strand of my own hair.”

“It’s true, father,” the princess confirmed and took out a little box. She opened it to reveal a single hair from the prince’s head inside.

Everyone was delighted with this news. The prince and Princess Rose got married on that very same day.

Upon learning that her curse had been broken again, the wicked witch’s evilness swelled so much that she exploded into a thousand tiny pieces. Eventually, rose blooms sprang up in every garden in the kingdom once again. And so it went: each evening Princess Rose sang her loving lullaby so that all people fell asleep and had sweet dreams till the break of dawn.