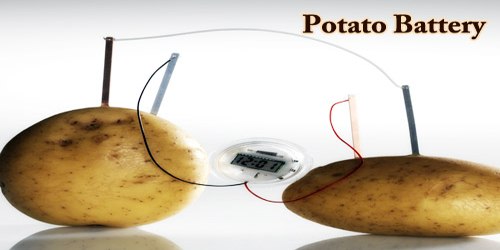 Potatoes have phosphoric acid and work well; they are the basis for commercial “potato clock” kits. Potato batteries with LED lighting have been proposed for use in poor countries or by off-grid populations. International research begun in 2010 showed that boiling potatoes for eight minutes improve their electrical output, as does placing slices of potatoes between multiple coppers and zinc plates. Boiled and chopped plantain pith (stem) is also suitable, according to Sri Lankan researchers.

Electricity in potato is generated by the chemical reaction through electrolyte and electrodes. The starchy juices inside the potatoes are what make the potato a battery. Potatoes contain a number of important vitamins and minerals. A medium potato (150g/5.3 oz) with the skin provides 27 mg vitamin C, 620 mg of potassium, 0.2 mg vitamin B6, and trace amounts of thiamin, riboflavin, folate, niacin, magnesium, phosphorus, iron, and zinc. Almost all of these minerals participate in or contribute to the chemical reaction with the electrodes resulting an electric flow.

The potato also known as the king of vegetables is an electrochemical cell that produces electricity from the chemicals found within it. Let us perform the potato battery experiment listed here to understand how it does so.

The electrical voltage and current produced by potatoes are at a very specific range. Considering the fact that each electrical device such as a light bulb or electric motor also has certain requirements to operate, the potato battery project is a very educational and challenging project.

Zinc and copper electrodes are reasonably safe and easy to obtain. Other metals such as lead, iron, magnesium, etc., can be studied as well; they yield different voltages than the zinc/copper pair. In particular, magnesium/copper cells can generate voltages as large as 1.6 V in lemon cells. This voltage is larger than obtainable using zinc/copper cells. It is comparable to that of standard household batteries (1.5 V), which is useful in powering devices with a single cell instead of using cells in series.

A potato battery is an electrochemical battery, otherwise known as an electrochemical cell. An electrochemical cell is a cell in which chemical energy is converted to electric energy by a spontaneous electron transfer. In the case of the potato, the zinc in the nail reacts with the copper wire. The potato acts as a sort of buffer between the zinc ions and the copper ions. The zinc and copper ions would still react if they touched within the potato but they would only generate heat. Since the potato keeps them apart, the electron transfer has to take place over the copper wires of the circuit, which channels the energy into the clock.