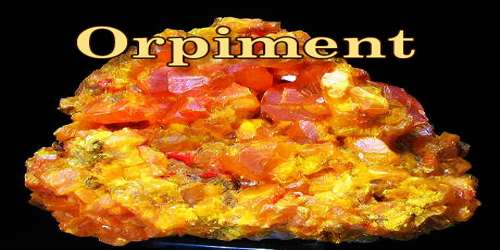 Orpiment, the transparent yellow-orange color mineral arsenic sulfide (As2S3), which is found in volcanic fumaroles, low-temperature hydrothermal veins, and hot springs and is formed both by sublimation and as a byproduct of the decay of another arsenic mineral, realgar. Orpiment takes its name from the Latin auripigmentum (aurum, “gold” + pigmentum, “pigment”) because of its deep-yellow color.

It has a Mohs hardness of 1-1/2 to 2 and is easily ground into a yellow to yellow-orange powder. Like realgar, its earliest widespread use was as a pigment for paints, inks, and dyes, and it was traded over great distances.

Orpiment is mentioned in the 17th century by Robert Hooke in Micrographia for the manufacture of small shot. It is used in the production of infrared-transmitting glass, oil-cloth, linoleum, semiconductors, photoconductors, pigments, and fireworks. Mixed with two parts of slaked lime, orpiment is still commonly used in rural India as a depilatory. It is used in the tanning industry to remove hair from hides. 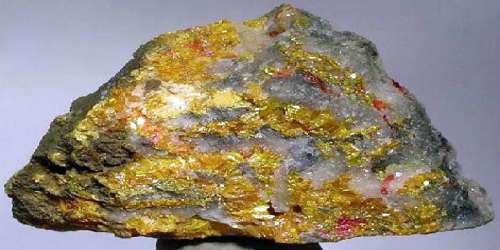 Occurrence and Properties of Orpiment –

Orpiment occurs in hydrothermal veins at Low temperature (up to 400°F/ 200°C), hot spring deposits, and volcanic fumaroles, and it may occur with stibnite and realgar. It also results from the alteration of other arsenic-bearing minerals. When heated, orpiment gives off the garlic odor typical of arsenic minerals. The luster is resinous on freshly broken surfaces but pearly on cleavage surfaces. It was used as a pigment, mainly in ancient times in the Middle East. It was also used later in the West but soon replaced due to its toxicity.

Orpiment is found in Copalnic, Romania; Andreas-Berg, Ger.; Valais, Switz.; and Çölemerik, Tur. The crystals belong to the monoclinic system.

Realgar and orpiment are especially discovered related to hydrothermal and volcanic activities. They are sublimation merchandise at volcanic vents and crystallization products at warm springs. These are the various earliest deposits exploited in the middle of a while. Underground deposits of realgar and orpiment are in veins and fractures. There they may be related to lead, silver, gold, and different arsenic minerals.

Orpiment was traded in the Roman Empire and was used as a medicine in China, even though it is very toxic. It has been used as fly poison and to tip arrows with poison. Because of its striking color, it was of interest to alchemists, both in China and the West, searching for a way to make gold. It also has been found in the wall decorations of Tutankhamun’s tomb and ancient Egyptian scrolls, and on the walls of the Taj Mahal.

Today the primary use of orpiment is as an ore of arsenic. It is also used in manufacturing oil cloth, semiconductors, and photoconductors.

Ancient Middle Eastern artists used orpiment (from Latin auri, “golden”; pigmentum, “paint”) as a pigment, but it gained little attention from Western artists until the 18th century, when production of artificial arsenic trisulfide was begun. Because of its extreme toxicity, it was abandoned, except for a very fine grade called king’s yellow, which was used until cadmium yellow (principally cadmium sulfide) became available.