National-anarchists advocate homogeneous communities in place of the nation state. National-anarchists argue that people of different ethnic or racial groups should be free to develop separately in their own tribal communes while striving to be politically horizontal, economically non-capitalist, ecologically sustainable, and socially and culturally traditional.

We are well-versed in national-socialism. Unfortunately, we have done so for a long time. In France, a proto-fascist movement calling itself national-communist has recently emerged. These term contradictions, mutually exclusive concepts joined by a hyphen, have become more visible than ever in recent years, producing the same nausea in us as everything else that boasts about its ‘national’ character. Now, from the other side of the Pyrenees, a new ideology appears on the horizon, and there is no better name for it than national-anarchism.

Although the term “national-anarchism” dates back to the 1920s, the contemporary national-anarchist movement has been promoted since the late 1990s by British political activist Troy Southgate, who positions it as “beyond left and right.” Scholars who have studied national-anarchism conclude that it represents a further evolution in the thinking of the radical right rather than an entirely new dimension on the political spectrum.

Anarchists regard national-anarchism as a rebranding of fascism and an oxymoron due to the inherent contradiction of anarchist philosophy of anti-fascism and support for universal equality between different nationalities as being incompatible with the idea of a synthesis between anarchism and fascism.

Both left-wing and far-right critics have expressed skepticism and outright hostility toward national anarchism. Critics accuse national-anarchists of being ethnonationalists who promote a communitarian and racialist form of ethnic and racial separatism while “wanting” the militant chic of calling themselves anarchists without the historical and philosophical baggage that would be said to accompany such a claim, such as anti-racist egalitarian anarchist philosophy and Jewish anarchist contributions.

Other anti-capitalist anarchists have been hostile to national anarchism. One eco-anarchist publication urged readers to treat national anarchists “as if they were Klansmen or Nazis.” This hostility has arisen as a result of the racism inherent in national anarchist ideology, as well as their stated strategy of siphoning off members of left-wing organizations. Some academics are skeptical that implementing national-anarchism will result in greater freedom, describing it as an authoritarian anti-statism that will result in authoritarianism and oppression on a smaller scale. 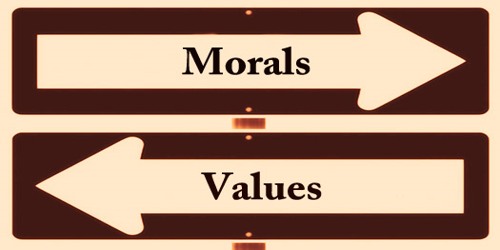 Differences Between Morals And Values