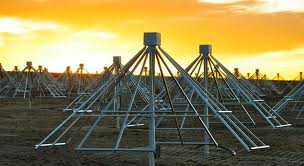 Multiple antenna techniques are used to improve the performance of wireless links in the telecommunication field. The Multiple Input Multiple Output (MIMO) technique uses an array of antennas for both transmitting and receiving end. Using MIMO techniques we can obtain better wireless communication as compared to other techniques. The electromagnetic waves transmitted from the antennas bounce around the environment, the receiver receives these electromagnetic waves from multiple directions, with varying delays. The delay varies since the different paths have different length. The Line of Sight (LOS) between the Base Station (BS) and the Subscriber Station (SS) is often very difficult to achieve, because the SS may be located indoors. 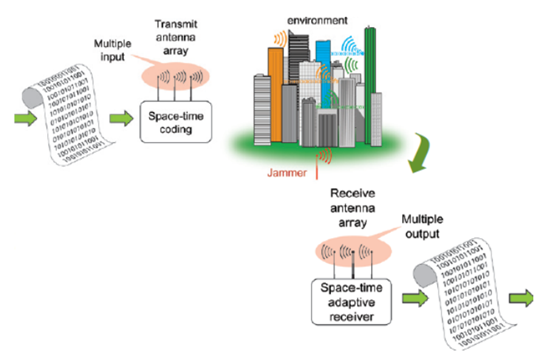 Diversity Scheme is a technique, which is used to improve the signal strength. In diversity scheme, two or more communication channels are used. Diversity plays an important role in reduction of fading and elimination of error burst. In diversity schemes multiple versions of the signal are transmitted and received. When these signals are transmitted the Forward Error Correction (FEC) code is added to different parts of the message. Different classes of diversity are given below.

Multiple versions of the same signals are transmitted at different time instants. The FEC

Code is added to the message. Then this message is spread in time before the transmission.  In other words  the  elements  of a radio signal transmitted at the same moment  in time  and  these elements arrive at the receiver at different moments in time, because these signals uses different physical paths, through the use of receiving antenna technology known as rake receivers and multiple input multiple output (MIMO).

In this, the signal is transmitted using different frequency channels, such as spread spectrum. OFDM modulation is also used with sub carrier and FEC.

In this technique multiple versions of signal are transmitted and received. It is used to minimize the effects of selective fading of the horizontal and vertical components of a radio signal. It is usually accomplished through the use of separate vertically and horizontally polarized receiving antennas.

Multi user diversity supports opportunistic user scheduling at either transmitter or receiver end.  By using scheduling, the transmitter selects the best user from the candidate received according to the quality of each channel.

The smart antenna system also called adaptive antenna system (AAS). In smart antenna system, by using signal processing techniques channel model attains channel knowledge to steer the beam towards the desired subscriber while transmitting null steering towards the interferer. The null steering cancels undesired portion of the signal and reduces the gain of radiation pattern obtained from adaptive array antenna. This is achieved by using Beam forming and null steering towards desired user. The process of combining the radiated signal and focusing it in the desired direction is called Beam forming.

In MIMO technique BS and SS both have minimum of two transmitter and receiver, per channel as shown in figure 2.2.

Generally in 802.16, for diversity schemes, following three techniques are considered.

The 802.16 standard supports the Alamouti Scheme. In Space Time Coding, the information is sent on two transmit antennas. The information is sent consecutively in time and is called transmit information in time and space. A space–time code (STC) is a method employed to improve the reliability of data transmission in wirelessHYPERLINK “http://en.wikipedia.org/wiki/Wireless” HYPERLINK “http://en.wikipedia.org/wiki/Wireless”communication systems using multiple transmit antennas. STCs rely on transmitting multiple, redundant copies of a data stream to the receiver in the hope that at least some of them may survive the physical path between transmission and reception in a good enough state to allow reliable decoding.

Space time codes may be split into two main types:

Space–time block codes (STBCs) act on a block of data at once (similarly to block codes) and provide only diversity gain, but are much less complex in implementation terms than STTCs.

Technique is used for capturing diversity gains. The purpose of the antenna switching is not to combine signals from the multiple antennas available, it is used to simply select the single antenna with the best channel gain at any given time. This is applicable to both downlink and uplink transmission.

Maximum Ratio Combining (MRC) is the technique of diversity scheme which estimates channel characteristics for multiple antennas. MRC obtain diversity and array gain but does not involve spatial multiplexing in any way. In maximum ratio combining, the signal of each channel are added together  and the gain of these channel is proportional to the Root Mean Square (rms) signal level and inversely proportional to the mean square noise level of these channels. Each channel has different proportionality constants, also known as ratio squared combining.

To improve the performance in the Telecommunication field its very essential techniques .Now days without multiple antenna techniques it is impossible to think communication of data transfer .The Multiple Input Multiple Output (MIMO) technique uses an array of antennas for both transmitting and receiving end .Smart Antenna Diversity Scheme, MIMO are the techniques of multiple antenna. MIMO is the best from another two. In Space Time Coding, the information is sent on two transmit antennas. In maximum ratio combining, the signal of each channel are added together  and the gain of these channel is proportional to the Root Mean Square  signal level and inversely proportional to the mean square noise level of these channels.

[3] B. Muquet, E. Biglieri, A. Goldsmith, and H. Sari, “An analysis of MIMO techniques for mobile WiMAX systems,” in Advances in Mobile WiMAX. New York: Wiley-IEEE

A Privacy-Preserving Concept for Smart Grid