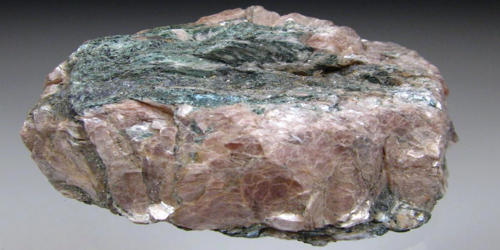 Margarite is a pink pearly micaceous mineral consisting of hydrated calcium aluminum silicate. It is a calcium-rich member of the mica group of the phyllosilicates with the formula: CaAl2(Al2Si2)O10(OH)2. It is a gray, pink, or yellow mica, occurring in brittle monoclinic crystals. It forms white to pinkish or yellowish-gray masses or thin laminae. The margarite in this occurrence forms preferentially along with the dark graphite rich inclusions with the chiastolite crystals. It is a rock formation that resembles beads, found in glassy igneous rocks. It is usually occurring as minute scales with a pearly luster. Formerly also called pearl mica. 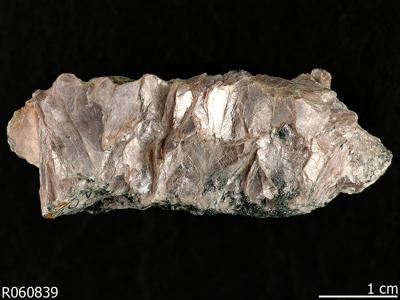 It crystallizes in the monoclinic crystal system. It typically has a specific gravity of around 3 and a Mohs hardness of 4. It is translucent with perfect 010 cleavages and exhibits crystal twinning. It is an aggregate of minute beadlike masses occurring in some glassy igneous rocks.

Occurrences: From low- to medium-grade metamorphic rocks, as in emery deposits, chlorite and mica schists, and glaucophane-bearing rocks.

It occurs commonly as an alteration product of corundum, andalusite, and other aluminous minerals. It has been reported as forming alteration pseudomorphs of chiastolite along with muscovite and paragonite. It is an aggregate of small, rudimentary crystals resembling minute globules in a row: found in glassy volcanic rocks.

Margarite and clintonite are examples of brittle micas. Both of these minerals occur in metamorphic rocks such as pelitic schists and metasomatized marbles as well as metamorphosed bauxites, basalts, and anorthosites.