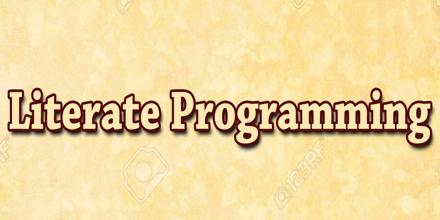 Literate Programming can be regarded as an essayist, whose main concern is with exposition and excellence of style. Literate programming paradigm, the central activity of programming becomes that of conveying meaning to other intelligent beings rather than merely convincing the computer to behave in a particular way. It is conceived by Knuth, represents a move away from writing programs in the manner and order imposed by the computer, and instead enables programmers to develop programs in the order demanded by the logic and flow of their thoughts. It’s  tools are used to obtain two representations from a literate source file: one suitable for further compilation or execution by a computer, the “tangled” code, and another for viewing as formatted documentation, which is said to be “woven” from the literate source.