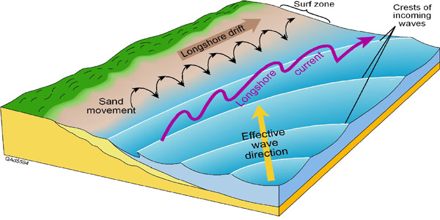 Longshore Drift is the movement of material along a coast by waves which approach at an angle to the shore but recede directly away from it. Longshore drift is the name given to the process by which beach material is transported along the coast by the action of waves. Waves rarely hit the beach at exactly right angles to the coast, and are far more likely to hit the beach at an angle. This is because in many areas the prevailing wind controls the direction of the waves and, obviously, very few long sections of coast are dead straight for miles and miles.