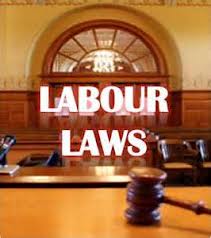 Labour law (or “labor”, or “employment” law) is the body of laws, administrative rulings, and precedents which address the legal rights of, and restrictions on, working people and their organizations. As such, it mediates many aspects of the relationship between trade unions, employers and employees. In Canada, employment laws related to unionized workplaces are differentiated from those relating to particular individuals. In most countries however, no such distinction is made. However, there are two broad categories of labour law. First, collective labour law relates to the tripartite relationship between employee, employer and union. Second, individual labour law concerns employees’ rights at work and through the contract for work. The labour movement has been instrumental in the enacting of laws protecting labour rights in the 19th and 20th centuries. Labour rights have been integral to the social and economic development since the industrial revolution.

Labour law arose due to the demands for workers for better conditions, the right to organize, and the simultaneous demands of employers to restrict the powers of workers’ many organizations and to keep labour costs low. Employers’ costs can increase due to workers organizing to win higher wages, or by laws imposing costly requirements, such as health and safety or equal opportunities conditions. Workers’ organizations, such as trade unions, can also transcend purely industrial disputes, and gain political power – which some employers may oppose. The state of labour law at any one time is therefore both the product of, and a component of, struggles between different interests in society.

The International Labour Organization (ILO) is devoted to advancing opportunities for women and men to obtain decent and productive work in conditions of freedom, equity, security and human dignity. Its main aims are to promote rights at work, encourage decent employment opportunities, enhance social protection and strengthen dialogue in handling work-related issues.

One of the principal functions of the ILO is setting international labour standards through the adoption of conventions and recommendations covering a broad spectrum of labour-related subjects and which, together, are sometimes referred to as the International Labour Code. The topics covered include a wide range of issues, from freedom of association to health and safety at work, working conditions in the maritime sector, night work, discrimination, child labour, and forced labour. The term “code” is somewhat a misnomer insofar as adoption of new standards and revision of old ones has not resulted in an entirely integrated and homogeneous body of law. This is not the case. Nevertheless, the broad scope of the subjects covered by the ILO’s standards suggests that the term “code” would be appropriate to use.

The Bangladesh Labour Code 2006 is one of the very recent laws with major overhauling changes in the field of labour legislation. The laws which this Code has replaced were made mostly during the British Colonial regime and Pakistan period and they were as many as 50 in number. In many cases these laws were outdated, scattered, inconsistent and often overlapping each other. In 1992 a Labour Law Commission was formed by the Government of the day which examined 44 labour laws and recommended to repeal 27 laws and it prepared a draft Labour Code in 1994. This draft of Labour Code, 1994 underwent series of changes in its vetting stages and finally the Bangladesh Labour Code 2006 was passed by the Parliament on October 11, 2006. Section 353 of the Code has repealed 25 previous labour related laws. There are still 25 valid laws dealing with labour and -industrial issues have not been repealed or consolidated and as such the Bangladesh Labour Code 2006 although a consolidated Act has not consolidated all the laws in the filed. Furthermore, although the name of the law is Bangladesh Labour Code,-in fact, it is not a Code rather a consolidating legislation only.

A recent tendency of legislative drafting by the government bodies has been that most of the laws are drafted in Bengali and so has been the case of the Bangladesh Labour Code, 2006.

Bangladesh being a member of International Labor Organization has been trying to maintain international standard in enacting laws relating to labor rights. The Bangladesh Labor Law 2006 is a complete code to protect the rights of labor in Bangladesh working in various factories and industries with maintaining the requirements of International Conventions of ILO. As a third World County it has been ratified most of conventions of ILO and assisting to promote more efficient operation of those treaties with implementing the laws relating to labor. Though it is not possible to maintain highest standard through its enactment and practical implementation of labor laws due to many social and economical restriction but the continuing process is somehow demands a lot of gratitude from international community.

Department of Law and Human Rights

The University of Asia Pacific

The Judiciary in Bangladesh

Reformation of the Anti Corruption Commission