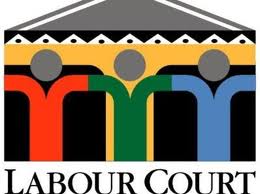 Application of the labour court


An industrial dispute may be referred to the labour court in any of the following ways:

(1)               If no settlement is arrived by way of conciliation and the parties agree not refer the dispute to an arbitrator and the parties have received a certificate of failure under section 210(11) the worker may go on strike or the employer may declare lock out. However the parties raising the dispute may either before or after the commencement of a strike or lock out make an application to the labour court for adjudication of the matter (section 211)

(3)               Again under section 213 any collective bargaining agent or any employer or worker may apply to the labour court for the enforcement of any right guaranteed or secured to it or him by or under this code or any award settlement.

Jurisdiction of the labour court

(1)               Adjudicate and determine an industrial dispute which has been referred to or brought before it under this code;

(4)               Exercise and perform such other powers and functions as are or may be conferred upon or assigned to it by under this code or any other law.

Power and status of the labour court in trying offences

Section 215 and 216 of the code provides the procedure and powers of labour court which is may be of two types;

(b) A labour court shall for the purpose of trying an offence under the code have the same powers as are vested in the court of a magistrate of the first class under the code of criminal procedure.

(c)                The labour court shall for the purpose of inflicting punishment have the same powers as are vested in Court of Session under that code.

Labour court is a civil court

In the case of Pubali Bank V the Chairman 1st labour court 44DLR(AD)40 the question was raised whether a labour court is a civil court or not their. Lordship of

the appellate division upon consideration of relevant provision of the industrial relations ordinance 1969 held that the labour court acts as civil court for limited purpose but not a civil court at all it is only by a legal fiction or a statutory hypothesis that it is to be treated as a civil court.

Power and function of the tribunal

(a)The same shall be decided according to the opinion of the majority, if any

(3) The judgment of the tribunal shall be delivered within a period of not    more then    60 days following the filing of the appeal.

(4) The tribunal shall have authority to punish for contempt of its authority, or that of any labour court as if it’s were a high court division of the Supreme Court.

(5) The tribunal may, on its own motion or on the application of any party, transfer a case from one labour court to another.

(6) The tribunal shall have superintendence and control over all labour courts.

Breach of contract for Injunction

Establishment of the Law Commission