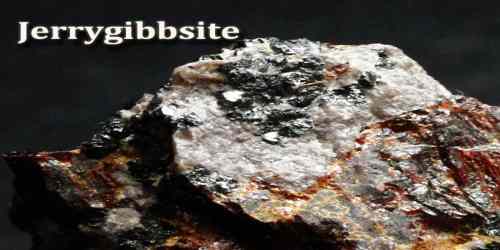 Jerrygibbsite is a rare silicate mineral with chemical formula: (Mn,Zn)9(SiO4)4(OH)2. It is member of the leucophoenite family of the humite group. It is always found with these two minerals. It is a dimorph of sonolite.Light to medium pinkish violet massive mineral with franklinite, willemite, and zincite. Not found with any calcite at the type location. Physically resembles leucophoenicite, sonolite, and other members of its group. It is not possible to sight identify this species. Each specimen requires verification. Numerous fakes are known. At the type locality, the mineral was found in very few specimens. X-ray diffraction may be used to identify the species in conjunction with a chemical analysis.

Jerrygibbsite was originally discovered by Pete J. Dunn in 1984, who named it after mineralogist Gerald V. Gibbs (born 1929). It has only been reported from the type locality of Franklin Furnace, New Jersey, United States, and in Namibia’s Otjozondjupa region.

The mineral jerrygibbsite was discovered in 1984 by Pete Dunn while conducting an X-ray spectrographic analysis of a sample previously assumed to be leucophoenicite. All samples found of jerrygibbsite are impure. All are incorporated within leucophoenicite, many by mixed layering, and tend to be found with many manganese humites such as sonolite. Physical properties are similar to those of leucophoenicite and sonolite, including hardness, coloring, and density. Jerrygibbsite has been found only in the Franklin Furnace mine in Franklin, New Jersey, and in the Kombat Mines in Namibia. Most of the minerals in the humite group have been found only here, as well as leucophoenicite. Jerrygibbsite has been found to occur in contact with willemite, zincite, and sonolite in an uncommon assemblage. Jerrygibbsite typically occurs as a massive mineral in interlocking anhedral crystals, up to 0.5 mm × 2.0 mm, which display a typical metamorphic texture. Subsequent finds from the Namibia mines were of two different textures.

Jerrygibbsite, in pure form, is a violet-pink mineral with a light pink streak. It has a calculated density of 4.045 g/cm³, and a tested density of 4.00 g/cm³, agreeing favorably, since measurements used to test density have few significant figures. It has a hardness of about 5.5, that of a knife blade. The general luster is vitreous, or shiny. Crystals are generally transparent to translucent. Crystals are not luminescent or fluorescent. Optically, jerrygibbsite is negative biaxial with 2V = 72˚ and a maximum birefringence of 0.017. In thin section, jerrygibbsite appears light pink. The crystal structure described by Kato is the equivalent of a unit-cell-twinned sonolite in which the cells are related by a b/4 glide plane.