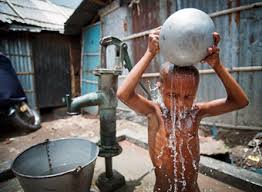 The basic needs of human are –food, clothing, shelter, education, and health.

Education is essential for human and one of the basic needs of human being.

Education in its broadest sense is any act or experience that has a formative effect on the mind, character or physical ability of an individual. In its technical sense education is the process by which society deliberately transmits its accumulated knowledge, skills and values from one generation to another.
Teachers in educational institutions direct the education of students and might draw on many subjects, including reading, writing, mathematics, science and history. This process is sometimes called schooling when referring to the education of teaching only a certain subject, usually as professors at institutions of higher learning. There is also education in fields for those who want specific vocational skills, such as those required to be a pilot. In addition there is an array of education possible at the informal level, such as, in museums and libraries, with the Internet and in life experience.

Education is a concept, referring to the process in which students can learn something:

Education arena in Bangladesh is not so developed. Literacy rate is low and there is a significant disparity between female and male literacy rates. However, with on going awareness of both the government and NGO’s, literacy rate has been going up. Bangladesh gets International Literacy Prize 1998 from UNESCO for its ongoing literacy rate. It is targeted that, the country will be illiteracy-free by the year 2005.
The education system is divided into 4 levels– Primary (from grades 1 to 5), Secondary (from grades 6 to 10), Higher Secondary (from grades 11 to 12) and tertiary. Alongside national educating system, English medium education is also provided by some private enterprises. They offer ‘A’ level and ‘O’ level courses. There is also Madrasa system which emphasizes on Arabic medium Islam-based education. This system is supervised by the lone Madrasa Board of the country.

In 1998 there were about 52,000 primary schools 11000 secondary institutions. The five years of lower secondary education concludes with a Secondary School Certificate (SSC) examination. Students who pass this examination proceed to two years of Higher Secondary or intermediate training, which culminate in a Higher Secondary School (HSC) examination. Five education boards lead by the Ministry of Education deal with education up to HSC level.
Under-graduate level is finished with HSC. Then begins graduation level which is dealt by universities. Universities also offer Master’s and Doctorate degrees.

On the other hand, health facilities are also important for human.

Health is the general condition of a person in all aspects. It is also a level of functional or metabolic efficiency of an organism, often implicitly human.

At the time of the creation of the World Health Organization (WHO), in 1948, health was defined as being “a state of complete physical, mental, and social well-being and not merely the absence of disease or infirmity”.
Only a handful of publications have focused specifically on the definition of health and its evolution in the first 6 decades. Some of them highlight its lack of operational value and the problem created by use of the word “complete.” Others declare the definition, which has not been modified since 1948, “simply a bad one.”.

Overall health is achieved through a combination of physical, mental, emotional, and social well-being, which, together is commonly referred to as the Health Triangle.
It is obvious that education and health facilities are very important for man. sometimes in Bangladesh it is seen that, lack of cleanliness or dirtiness of school latrines and lack of safe water supply creates some problems for the students for which they avoid to use school latrines; which generates some health problems to the students in future. Especially to the female students.

Education is one of the basic needs of human. The persons how are educated, are always deprived from their rights and become a victim of discrimination in their employment, and leads a backward life. So to develop their livelihood education is compulsory.
And the foundation of education is school. At present, from the realization of the necessity of education many schools are established, but they dot maintain a minimum standard and do not provide sufficient facilities, which are necessary for the mental development and physical fitness of the students.

Aims And Objectives Of The Study:

Investigate the health problems of school going students and their underlying causes:
(a) food
(b) sanitation
(c) water supply
o investigate the relation between this particular facilities and school absence.

Methodology Of The Study:

To extract real phenomena, research is most easiest and traditional systems. Several procedures are needed in completion of any research. The ultimate result of a research depends on overall procedures. So adjustment between objective and procedures is an important issue. Generally research can be considered as a scientific process to get vast knowledge about a certain thing.

Accurate and dependable information are needed for obtaining true knowledge about something. Data collection is the most important part to perform a research. For this reason in various researches, many type of data are collected to meet up objectives.

“Water Supply And Sanitation Sector In The Schools Of Wari Area” is the title of present study which is conducted based on field data and secondary data. To perform the present study following procedures were followed:

PRIMARY DATA:
To capture primary data from the students of the survey area questionnaire survey was conducted.

SECONDARY DATA:
To fulfill the aims and objectives of the present study, the importance of secondary data are very essential. In this research, secondary data were used which are generally published by various institutions and researchers. Various published and un published information’s, file research paper and data were also used here. More over water supply and sanitation problems, education, health related books, published unpublished journals, internet articles were explored thoroughly.

After collecting data by the questionnaires and considering the purpose and objectives of the study, a classification was made according to similarities and dissimilarities. From the classification of raw data statistical series was prepared to present the collected and classified data in a properly arranged way.

Rationale Of The Study:

Public education in Bangladesh generally follows the model established by the British prior to 1947. Elementary education is free, but at least one-third of all children are not enrolled in school. Poor school attendance is a major reason for a literacy rate of only 35 percent for Bangladeshis aged 15 and older. In the period 1989 to 1990, the country had about 45,000 elementary schools, with a total annual enrollment of some 11.3 million pupils, and about 10,000 secondary schools, with a combined yearly enrollment of about 3 million.

Bangladesh, in full, People’s Republic of Bangladesh, republic of southern Asia, in the northeastern portion of the Indian subcontinent, bordered on the west, north, and east by India, on the southeast by Burma (Myanmar), and on the south by the Bay of Bengal. The area of the country is 143,998 sq km (55,598 sq mi). The capital and largest city of Bangladesh is Dhaka.

Dhaka stands(town) on the bank of the river Buriganga. It consists of seven principal thanas (DHANMONDI, KOTWALI, MOTIJHEEL, RAMNA, MOHAMMADPUR, SUTRAPUR and TEJGAON) and 14 auxiliary thanas (GULSHAN, LALBAGH, MIRPUR, PALLABI, SABUJBAGH, CANTONMENT, DEMRA, HAZARIBAGH, SHYAMPUR, BADDA, KAFRUL, KAMRANGIR CHAR, KHILGAON and UTTARA), 148 wards and 824 mahallas. It has an area of 304 sq km. The town has a population of Dhaka Statistical Metropolitan Area is 99,12,908 according to the Population Census 2001, Preliminary Report, BBs; male 55.24%, female 44.76%; population density per sq km 32608. Literacy rate among the town people is 62.3%.

Sutrapur Thana (DHAKA district) with an area of 3.51 sq km, is bounded by MOTIJHEEL thana on the north, KERANIGANJ upazila on the south, DEMRA thana on the east, KOTWALI thana (Dhaka) on the west. Main river is BURIGANGA.

The area Wari is located in Sutrapur thana (Dhaka district). Baldha Garden- an exotic botanical garden on 3.15 acres of land located at Wari. There are two hospitals, one sub Post Office, one Police Fari are located at wari.
Safe water supply, good sanitation problems facilities, adequate sports facilities beside education – are very important for the mental growth and physical fitness of the students of the school.

From the above chart, it is seen that the number of students in the schools of Wari area are not bad. So, it is very important to know the water supply and sanitation problems facilities of these schools.

It is recognized that for schools, water and sanitation problems facilities are important and that hygiene education should be part of the curriculum, recurring in different subjects and referred to by authority figures. In practice, however, the situation in many schools in developing countries is deplorable. The sanitation problems are non-existent or very poor, sometimes even unsafe, and a cause of much disease. The children in these countries acquire early on a heavy infectious load. Schools should not be adding to it. Infections impair the growth and development of the children, limit their attendance and negatively affect their ability to concentrate and learn.

From the investigation, it is known that, school latrines are not comfortable for all students.

The reasons of uncomfortable are – dirtiness, lack of water supply, for getting fear, and many other reasons.

From the investigation it is found that, most of the student likes the teaching method and environment of the school.

And most of student of these schools attends regularly in school, but sometimes they miss school especially for sickness.

Most of these schools have no play ground and if they have play ground it is not sufficient, which pays a bad effect to the mental growth of the students.

Canteens of these schools does not serve hygienic food, and for this students are getting affected by different types of diseases.

Students bring drinking water from home, because most of the school serves students tap water, which is not safe.

a) Excess pressure of education on the students should be reduced.

b) Adequate play ground and recreation facilities should be provided for the mental growth and physical fitness of the students.

c) School authority should be careful to maintain the quality of canteen food.

d) Every school should arrange to supply filter water to the students.

e) The school authority should increase the number of latrines where there is scarcity of latrines.

g) Encourage students in motivating their family members and neighbors to use safe water and sanitary latrines, to avoid diseases.

Problem and Prospect of Infant Nutrition Market in Bangladesh