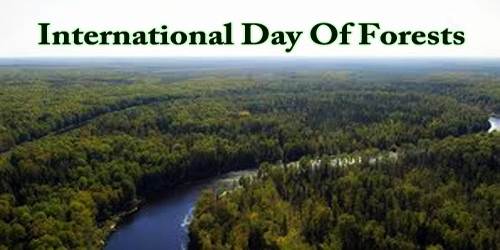 Forests cover about one-third of the world’s landmass. Roughly 1.6 billion people, including more than 2000 indigenous cultures, depend on forests for their livelihood. Forests are vital to the planet for many reasons, including:

The International Day of Forests was established on the 21st day of March, by resolution of the United Nations General Assembly on 28th November 2012. Each year, various events celebrate and raise awareness of the importance of all types of forests, and trees outside forests, for the benefit of current and future generations. Countries are encouraged to undertake efforts to organize local, national, and international activities involving forests and trees, such as tree planting campaigns, on International Day of Forests. The Secretariat of the United Nations Forum on Forests, in collaboration with the Food and Agriculture Organization, facilitates the implementation of such events in collaboration with governments, the Collaborative Partnership on Forests, and international, regional and subregional organizations. International Day of Forests was observed for the first time on 21st March 2013.

The organizers are the United Nations Forum on Forests and the Food and Agriculture Organization of the United Nations (FAO), in collaboration with Governments, the Collaborative Partnership on Forests, and other relevant organizations in the field. The Day celebrates and raises awareness of the importance of all types of forests. Each year more than 13 million hectares (32 million acres) of forests are lost, an area roughly the size of England. As go the forests, so grow the plant and animal species that they embrace 80% of all terrestrial biodiversity. Most importantly, forests play a critical role in climate change including global warming: deforestation results in 12-18 percent of the world’s carbon emissions almost equal to all the CO2 from the global transport sector. Equally crucial, healthy forests are one of the world’s primary ‘carbon sinks.’

Today, forests cover more than 30% of the world’s land and contain more than 60,000 tree species, many as of yet unidentified. Forests provide food, fiber, water, and medicines for approximately 1.6 billion of the world’s poorest people, including indigenous peoples with unique cultures. On each International Day of Forests, countries are encouraged to undertake local, national, and international efforts to organize activities involving forests and trees, such as tree-planting campaigns. The theme for each International Day of Forests is chosen by the Collaborative Partnership on Forests.