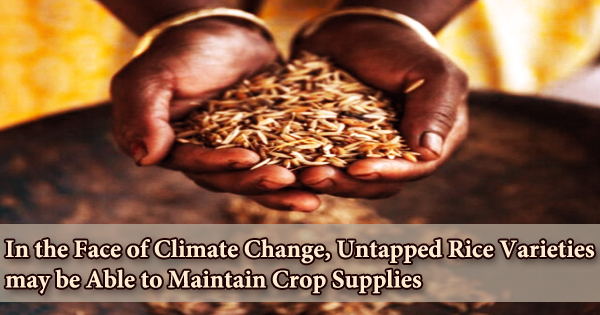 In the Face of Climate Change, Untapped Rice Varieties may be Able to Maintain Crop Supplies

According to a recent study published in Rice, local rice varieties in Vietnam might be utilized to help develop better crops with increased climate change resilience. Earlham Institute researchers are working with gene banks and rice breeders in Vietnam as part of a worldwide partnership championed by the International Rice Research Institute (IRRI) to find varieties that can withstand an increasingly uncertain environment.

The new genetic data they’ve gathered will go a long way toward assisting attempts to develop more robust rice crops for increased worldwide output. Vietnam’s unrivaled topography and history, as well as its varied variety of habitats and latitudinal range, have resulted in a huge diversity of rice landraces.

Rice cultivation is extremely valuable in Vietnam, both as an export commodity and as a daily food staple for the country’s 96 million inhabitants. Rice is a nutritious, flexible, and inexpensive carbohydrate that is a staple in many people’s diets across the world.

Climate change, on the other hand, is endangering its widespread availability, with Vietnam’s unique geography and ecology putting it in particular jeopardy.

Critically, the world’s poorest are the most reliant on this crop, and they are also the most vulnerable to climate change, which is exacerbated by the COVID-19 epidemic, which has disrupted food and nutrition security for billions of people.

The study team analyzed 672 Vietnamese rice genomes, 616 of which were newly sequenced, to fully grasp the distinctiveness and potential of this local crop variety. The rice genomes cover a wide range of rice types cultivated in Vietnam’s various environments.

The researchers identified a previously unknown big rice subpopulation known as ‘I5 Indica’ in some parts of Vietnam, which had never been exploited to generate the more prevalent elite rice types that had resulted from prior rice improvement experiments.

These regionally adapted rice varieties may provide a source of new genes carrying key agronomic characteristics that might be used in future rice breeding programs.

This will aid in the development of a new generation of ‘Green Super Rice,’ which will reduce production input while improving nutritional content and appropriateness for growing on marginal areas, culminating in more sustainable and robust rice that can resist harsh weather.

First author Dr. Janet Higgins at the Earlham Institute, said: “Vietnam has a rich history in rice breeding, especially at the local level. The adaptation to multiple environmental conditions and regional preferences has created a wide range of varieties.”

“These variety appears to be a mostly unexplored and extremely important genetic resource for local and international breeding programs, according to studies like this.”

To figure out how Vietnamese rice diversity compares to global variations, the researchers looked at nine landrace subpopulations that were presumably suited to the needs of their respective origin locations.

They then compared this new information to the previously published global research on rice diversity in Asia, which included fifteen Asian subpopulations (from 89 countries) in the ‘3000 Rice Genomes Project.’ The Earlham Institute researchers used this information to figure out how the novel rice types local to Vietnam were connected to the worldwide Asian data collection, which led to the discovery of the I5 Indica subpopulation.

Dr Higgins, explains: “Improved varieties, which are high yielding but can also be grown sustainably, are needed to ensure we can continue to meet the worldwide demand for rice. Salt and drought tolerance are related critical traits which need to be addressed in order to secure future rice production.”

“To break the vicious cycle of rice contributing to global warming through greenhouse gas emissions from agricultural fields and areas of production endangered by climate change, agronomic, smart crop management techniques, and genomic solutions are required.”

“It would be wonderful if the IRRI could include any of the Indica I5 cultivars described in our study into their breeding programs in the future. We think that this new information will greatly aid in optimizing sustainable rice production for global demand while also safeguarding the environment.”