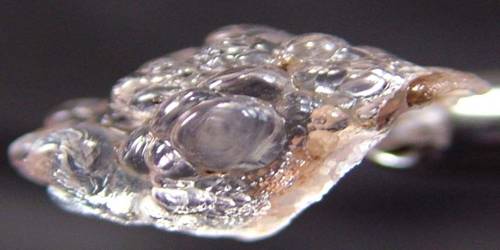 Hyalite is a form of opal with a glassy and clear appearance which may exhibit an internal play of colors if natural inclusions are present. It is a colorless opal that is clear as glass or sometimes translucent or whitish. It is also called Muller’s glass, water opal, and jalite. The name Müller’s glass derived from the name of its discoverer, Franz-Joseph Müller von Reichenstein. Hyalite’s Mohs hardness is 5.5 to 6 and has a specific gravity of 1.9 – 2.1. It has no planes of cleavage but fractures conchoidally are clear or translucent and have a globular structure. Its luster is vitreous and its streak is white. Hyalite is an amorphous form of silica (SiO2) formed as a volcanic sublimate in volcanic or pegmatic rock and is therefore considered a mineraloid. It contains 3 – 8% water, either as a silanol group or in molecular form.

Hyalite occurs as globular and botryoidal masses and irregular crusts in volcanic and pegmatite environments where the silica deposits from the gas phase (Flörke et al, 1973). It often shows a strong green fluorescence in UV light.

Opalescent hyalite is used in jewelry, and well-formed samples are of interest to collectors due to their unusual appearance, mode of formation and relative rarity. It is sometimes mistaken for resin opal or silica glass since they both may appear clear and globular, but it can be identified under ultraviolet light due to its bright green fluorescence.