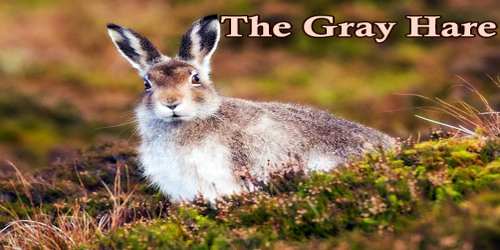 Then he would give one leap, two leaps, through the snow, and sit up again on his hind legs and look all around.

On all sides nothing was to be seen except snow. The snow lay in billows and glittered like silver. Above the hare was frosty vapor, and through this vapor glistened the big white stars.

The hare was obliged to make a long circuit across the highway to reach his favorite granary. On the highway he could hear the creaking of the sledges, the whinnying of horses, the groaning of the seats in the sledges.

Once more the hare paused near the road. The peasants were walking alongside of their sledges, with their coat collars turned up. Their faces were scarcely visible. Their beards, their eyebrows were white. Steam came from their mouths and noses.

Their horses were covered with sweat, and the sweat grew white with hoar frost. The horses strained on their collars, plunged into the hollows, and came up out of them again. Two old men were walking side by side, and one was telling the other how a horse had been stolen from him.

As soon as the teams had passed, the hare crossed the road, and leaped unconcernedly toward the threshing-floor. A little dog belonging to the teams caught sight of the hare and began to bark, and darted after him.

The hare made for the threshing-floor across the snowdrifts. But the depth of the snow impeded the hare, and even the dog, after a dozen leaps, sank deep in the snow and gave up the chase.

The hare also stopped, sat on his hind legs, and then proceeded at his leisure toward the threshing-floor.

On the way across the field he fell in with two other hares. They were nibbling and playing. The gray hare joined his mates, helped them clear away the icy snow, ate a few seeds of winter wheat, and then went on his way.

In the village it was all quiet; the fires were out; the only sound on the street was a baby crying in a cottage, and the framework of the houses creaking under the frost.

The hare hastened to the threshing-floor, and there he found some of his mates. He played with them on the well-swept floor, ate some oats from the tub on which they had already begun, mounted the snow-covered roof into the granary, and then went through the hedge toward his hole.

In the east the dawn was already beginning to redden, the stars dwindled, and the frosty vapor grew thicker over the face of the earth. In the neighboring village, the women woke up and went out after water; the peasants began carrying fodder from the granaries; the children were shouting. Along the highway more and more teams passed by, and the peasants talked in louder tones.

The hare leaped across the road, went to his old hole, selected a place a little higher up, dug away the snow, curled into the depths of his new hole, stretched his ears along his back, and went to sleep with his eyes wide open.