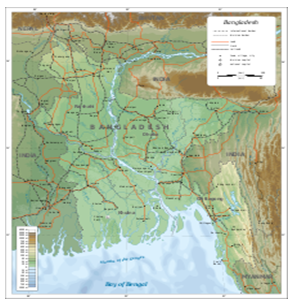 Bangladesh is a low-lying, riverine country located in South Asia with a largely marshy jungle coastline of 710 km (441 mi) on the northern littoral of the Bay of Bengal. Formed by a delta plain at the confluence of the Ganges (Padma), Brahmaputra (Jamuna), and Meghna Rivers and their tributaries, Bangladesh’s alluvial soil is highly fertile, but vulnerable to flood and drought. Hills rise above the plain only in the Chittagong Hill Tracts in the far southeast and the Sylhet division in the northeast. Straddling the Tropic of Cancer, Bangladesh has a tropical monsoon climate characterized by heavy seasonal rainfall, high temperatures, and high humidity. Natural disasters, such as floods, tornadoes, and tidal bores affect the country yearly. Bangladesh also is affected by major cyclones, on average 16 times a decade. A cyclone struck the southeastern coast in May 1991, killing 136,000 people. Cyclone Sidr struck the southwestern coast on November 15, 2007, affecting not only the coastal districts of the administrative division Khulna but also about half of the tropical forest Sundarbans.

The physical geography of Bangladesh is varied and has an area characterized by two distinctive features: a broad deltaic plain subject to frequent flooding, and a small hilly region crossed by swiftly flowing rivers.The country has an area of 147,570 square kilometers and extends 820 kilometers north to south and 600 kilometers east to west. Bangladesh is bordered on the west, north, and east by a 4,095-kilometer land frontier with India and, in the southeast, by a short land and water frontier (193 km) with Burma (Myanmar). On the south is a highly irregular deltaic coastline of about 580 kilometers, fissured by many rivers and streams flowing into the Bay of Bengal. The territorial waters of Bangladesh extend 12 nautical miles (22 km), and the exclusive economic zone of the country is 200 nautical miles (370 km).

Roughly 80% of the landmass is made up of fertile alluvial lowland called the Bangladesh Plain. The plain is part of the larger Plain of Bengal, which is sometimes called the Lower Gangetic Plain. Although altitudes up to 105 meters above sea level occur in the northern part of the plain, most elevations are less than 10 meters above sea level; elevations decrease in the coastal south, where the terrain is generally at sea level. With such low elevations and numerous rivers, water—and concomitant flooding—is a predominant physical feature. About 10,000 square kilometers of the total area of Bangladesh is covered with water, and larger areas are routinely flooded during the monsoon season. 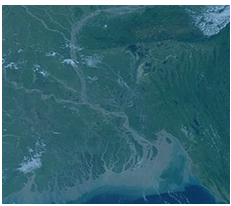 Urbanization is proceeding rapidly, and it is estimated that only 30% of the population entering the labor force in the future will be absorbed into agriculture, although many will likely find other kinds of work in rural areas. The areas around Dhaka and Comilla are the most densely settled. The Sundarbans, an area of coastal tropical jungle in the southwest and last wild home of the Bengal Tiger, and the Chittagong Hill Tracts on the southeastern border with Burma and India, are the least densely populated.

Bangladesh has a tropical monsoon climate characterized by wide seasonal variations in rainfall, high temperatures, and high humidity. Regional climatic differences in this flat country are minor. Three seasons are generally recognized: a hot, muggy summer from March to June; a hot, humid and rainy monsoon season from June to November; and a warm-hot, dry winter from December to February. In general, maximum summer temperatures range between 38 and 41 °C (100.4 and 105.8 °F). April is the hottest month in most parts of the country. January is the coolest month, when the average temperature for most of the country is 16–20 °C (61–68 °F) during the day and around 10 °C (50 °F) at night. .

Heavy rainfall is characteristic of Bangladesh causing it to flood every year. With the exception of the relatively dry western region of Rajshahi, where the annual rainfall is about 1,600 mm (63.0 in), most parts of the country receive at least 2,300 mm (90.6 in) of rainfall per year. Because of its location just south of the foothills of the Himalayas, where monsoon winds turn west and northwest, the region of Sylhet in northeastern Bangladesh receives the greatest average precipitation. From 1977 to 1986, annual rainfall in that region ranged between 3,280 and 4,780 mm (129.1 and 188.2 in) per year. Average daily humidity ranged from March lows of between 55 and 81% to July highs of between 94 and 100%, based on readings taken at selected stations nationwide in 1986.

About 80% of Bangladesh’s rain falls during the monsoon season. The monsoons result from the contrasts between low and high air pressure areas that result from differential heating of land and water. During the hot months of April and May hot air rises over the Indian subcontinent, creating low-pressure areas into which rush cooler, moisture-bearing winds from the Indian Ocean. This is the southwest monsoon, commencing in June and usually lasting through September. Dividing against the Indian landmass, the monsoon flows in two branches, one of which strikes western India. The other travels up the Bay of Bengal and over eastern India and Bangladesh, crossing the plain to the north and northeast before being turned to the west and northwest by the foothills of the Himalayas.

Annual monsoon flooding results in the loss of human life, damage to property and communication systems, and a shortage of drinking water, which leads to the spread of disease. For example, in 1988 two-thirds of Bangladesh’s 64 districts experienced extensive flood damage in the wake of unusually heavy rains that flooded the river systems. Millions were left homeless and without potable water. Half of Dhaka, including the runway at the ShahjalalInternationalAirport—an important transit point for disaster relief supplies—was flooded. About 2,000,000 tonnes (2,204,623 short tons; 1,968,413 long tons) of crops were reported destroyed, and relief work was rendered even more challenging than usual because the flood made transportation of any kind exceedingly difficult. A tornado in April 1989 killed more than 600 people, possibly many more.

There are no precautions against cyclones and tidal bores except giving advance warning and providing safe public buildings where people may take shelter. Adequate infrastructure and air transport facilities that would ease the sufferings of the affected people had not been established by the late 1980s. Efforts by the government under the Third Five-Year Plan (1985–90) were directed toward accurate and timely forecast capability through agrometeorology, marine meteorology, oceanography, hydrometeorology, and seismology. Necessary expert services, equipment, and training facilities were expected to be developed under the United Nations Development Programme. 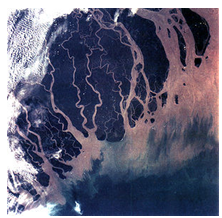 The rivers of Bangladesh mark both the physiography of the nation and the life of the people. About 700 in number, these rivers generally flow south. The larger rivers serve as the main source of water for cultivation and as the principal arteries of commercial transportation. Rivers also provide fish, an important source of protein. Flooding of the rivers during the monsoon season causes enormous hardship and hinders development, but fresh deposits of rich silt replenish the fertile but overworked soil. The rivers also drain excess monsoon rainfall into the Bay of Bengal. Thus, the great river system is at the same time the country’s principal resource and its greatest hazard.

The profusion of rivers can be divided into five major networks. The Jamuna-Brahmaputra is 292 kilometers long and extends from northern Bangladesh to its confluence with the Padma. Originating as the Yarlung Tsangpo River in China’s Xizang Autonomous Region (Tibet) and flowing through India’s state of Arunachal Pradesh, where it becomes known as the Brahmaputra (“Son of Brahma”), it receives waters from five major tributaries that total some 740 kilometers in length. At the point where the Brahmaputra meets the TistaRiver in Bangladesh, it becomes known as the Jamuna. The Jamuna is notorious for its shifting subchannels and for the formation of fertile silt islands (chars). No permanent settlements can exist along its banks.

The second system is the Padma-Ganges, which is divided into two sections: a 258-kilometer segment, the Ganges, which extends from the western border with India to its confluence with the Jamuna some 72 kilometers west of Dhaka, and a 126-kilometer segment, the Padma, which runs from the Ganges-Jamuna confluence to where it joins the MeghnaRiver at Chandpur. The Padma-Ganges is the central part of a deltaic river system with hundreds of rivers and streams—some 2,100 kilometers in length—flowing generally east or west into the Padma.

The third network is the Surma-Meghna River System, which courses from the northeastern border with India to Chandpur, where it joins the Padma. The Surma-Meghna, at 669 kilometers by itself the longest river in Bangladesh, is formed by the union of six lesser rivers. Below the city of Kalipur it is known as the Meghna. When the Padma and Meghna join together, they form the fourth river system—the Padma-Meghna—which flows 145 kilometers to the Bay of Bengal.

This mighty network of four river systems flowing through the Bangladesh Plain drains an area of some 1.5 million square kilometers. The numerous channels of the Padma-Meghna, its distributaries, and smaller parallel rivers that flow into the Bay of Bengal are referred to as the Mouths of the Ganges. Like the Jamuna, the Padma-Meghna and other estuaries on the Bay of Bengal are also known for their many chars.

During the annual monsoon period, the rivers of Bangladesh flow at about 140,000 cubic meters per second, but during the dry period they diminish to 7,000 cubic meters per second. Because water is so vital to agriculture, more than 60% of the net arable land, some 91,000 km², is cultivated in the rainy season despite the possibility of severe flooding, and nearly 40% of the land is cultivated during the dry winter months. Water resources development has responded to this “dual water regime” by providing flood protection, drainage to prevent overflooding and waterlogging, and irrigation facilities for the expansion of winter cultivation. Major water control projects have been developed by the national government to provide irrigation, flood control, drainage facilities, aids to river navigation and road construction, and hydroelectric power. In addition, thousands of tube wells and electric pumps are used for local irrigation. Despite severe resource constraints, the government of Bangladesh has made it a policy to try to bring additional areas under irrigation without salinity intrusion.

Resources and land use

Study on Poor Performance in Education

Womens Status in Bangladesh and its Impact on Fertility