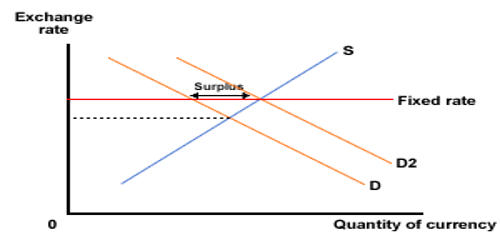 Exchange rates can be understood as the price of one currency in terms of another currency. Fixed Exchange Rate Regime is a regime applied by a government or central bank ties the country’s currency official exchange rate to another country’s currency or the price of gold. It is sometimes called a pegged exchange rate regime, is one in which a monetary authority pegs its currency’s exchange rate to another currency, a basket of other currencies or to another measure of value (such as gold), and may allow the rate to fluctuate within a narrow range. The purpose of this system is to keep a currency’s value within a narrow band. To maintain the exchange rate within that range, a country’s monetary authority usually needs to intervene in the foreign exchange market. Fixed rates provide greater certainty for exporters and importers. A movement in the peg rate is called either revaluation or devaluation. To maintain it, the central bank intervenes in the foreign exchange market and changes interest rates.

A currency board is an exchange rate regime in which a country’s exchange rate maintains a fixed exchange rate with a foreign currency, based on an explicit legislative commitment. A country’s monetary authority determines the exchange rate and commits itself to buy or sell the domestic currency at that price. It helps the government maintain low inflation, which, in the long run, keep the interest rates down and stimulates trade and investment. It is a type of fixed regime that has special legal and procedural rules designed to make the peg “harder—that is, more durable”. Examples include the Hong Kong dollar against the U.S dollar and Bulgarian lev against the Euro. However, a fixed-rate system limits a central bank’s ability to adjust interest rates as needed for economic growth.

Exchange rate regimes are the frame under which that price is determined. If the value of currencies fluctuates, significantly this can cause problems for firms engaged in trade. Dollarisation, also currency substitution, means a country unilaterally adopts the currency of another country. Effective management of a fixed-rate system also requires a large pool of reserves to support the currency when it is under pressure. Most of the adopting countries are too small to afford the cost of running their own central bank or issuing their own currency. Most of these economies use the U.S dollar, but other popular choices include the euro, and the Australian and New Zealand dollars. Developing economies often use a fixed-rate system to limit speculation and provide a stable system

Exchange rates are determined in the foreign exchange market, which is open to a wide range of buyers and sellers where currency trading is continuous. A currency union, also known as monetary union, is an exchange regime where two or more countries use the same currency. Under a currency union, there is some form of transnational structure such as a single central bank or monetary authority that is accountable to the member states.

Benefits of Investing in Dividend Stocks