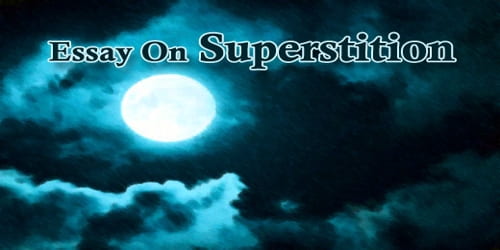 Introduction: ‘Superstition’ is a blind belief in the supernatural which is to say, a belief in the existence of forces or entities that do not conform to the laws of nature or a scientific understanding of the universe. It finds a fertile soil and breeding ground in human ignorance and a lack of scientific knowledge.

The word ‘superstition’ is often used to refer to a religion not practiced by the majority of a given society regardless of whether the prevailing religion contains alleged superstitions. Identifying something as superstition is generally pejorative. Items referred to as such in common parlances are commonly referred to as folk belief in folkloristic.

Examples of Superstitions: Superstitions that belong to a cultural tradition (in some cases inseparable from religious superstition) are enormous in their variety. Many persons, in nearly all times, have held, seriously or half-seriously, irrational beliefs concerning methods of warding off ill or bringing good, foretelling the future, and healing or preventing sickness or accident. Some other examples of ‘superstitions’ included:

A few specific folk traditions, such as belief in the evil eye or in the efficacy of amulets, have been found in most periods of history and in most parts of the world. Others may be limited to one country, region, or village, to one family, or to one social or vocational group.

One of the best-known superstitions of the western world is the belief that Friday the 13th is unlucky. It is instructive to note that in other cultures the number 13 isn’t regarded as especially foreboding. Numerals that are threatening or off-putting in other cultures include:

4, which in China sounds like the word for “death”

9, which in Japan sounds similar to the word for “torture” or “suffering”

39, which in Afghanistan translates into morda-gow, meaning “dead cow” but also slang for “pimp”

Source of Superstitions: The word ‘superstition’ was first used in English in the 15th century, modeled after an earlier French superstition. The earliest known use as an English noun occurs in Friar Daw’s Reply (ca. 1420), where the foure general synnes are enumerated as Cediciouns, supersticions, þe glotouns, & þe proude. The French word, together with its Romance cognates (Italian superstizione, Spanish supersticón, Portuguese superstição, Catalan superstició) continues Latin superstitio.

In today’s world, people still believe in omens and auguries. Even in the age of rapid advancement of science and technology, they are afraid like their forefathers living in the caves and connect their misfortunes with mysterious and unknown forces. Such a state of mind always gives rise to various types of superstitions.

Animals and human sacrifices to appease the unknown black forces reflect man’s intellectual bankruptcy, primitiveness, and ignorance. On the other hand, much fraud is being perpetrated in the name of astrology, palmistry, Occult science, rituals, and the so-called religious faiths. Man is still afraid, awed, and hunted by the fear of the unknown, inexplicable trouble and suffering through the offerings to the ghosts.

Origin of Superstitions: All superstitions have their origin in human psychology of fear of ill-luck, insecurity and the dread of inexplicable forces in nature. When some phenomena cannot be made out or explained, people start dreading them and assign them supernatural, divine and mysterious origins. Tantriks, priests, godmen, babas, other vested interests also help in spreading superstitions. In superstition, the astrologers, priests, stargazers, magicians, god-men, quacks and babas have a very good business.

Firm beliefs in charms, supernatural powers, ghosts, goblins, witches, and evil spirits have their deep roots in superstitions. It is a vile as it makes us deprived of self-confidence, self-control, rationality, farsighted power, etc. by weakening our willpower and spirit. It is a bar to take an unswerving determination or decision to do anything either at present or in the future. It results from ignorance and irrational fear.

There are lucky and unlucky numbers, days, things, animals, birds, etc. Most people do not intend to start any work on Saturday. They think this day to be an unlucky day. Many people are not willing to cut down bamboo on Tuesday because the cutting down of bamboo on this day may bring an ill-luck and suffering for them. Our superstitions have blurred the dividing line between religion and blind belief, bigotry, and spiritualism, prayer, and incantation, etc.

Superstition has been deeply influential in history. Even in so-called modern times, in a day when objective evidence is highly valued, there are few people who would not, if pressed, admit to cherishing secretly one or two irrational beliefs or ‘superstitions’.

People’s Impression of Superstitions: Impression in people differs from man to man. Hence most people are afraid of the unlucky number 13. This number often brings misfortune for them, they think. The eclipse of the sun and the moon, the shooting star, cries of owls, ravens, mewing, howling, braying, etc. are superstitions.

They take them to be ill-omens. Again people wear the elements of stones, rings, armlets, a talisman to remove their baseless fear in case of diseases like fever, diarrhea, pox, influenza, etc. They also believe in fakirism. Without undergoing the treatment of doctors, rural women do everything in a very orthodox manner.

People seem to believe that superstitions influence events by changing the likelihood of currently possible outcomes rather than by creating new possible outcomes. In sporting events, for example, a lucky ritual or object is thought to increase the chance that an athlete will perform at the peak of their ability, rather than increasing their overall ability at that sport. Consequently, people whose goal is to perform well are more likely to rely on “supernatural assistance” lucky items and rituals than are people whose goal is to improve their skills and abilities and learn in the same context.

Conclusion: This is the age of reason, science, and technology, yet many primitive superstitions continue endlessly.