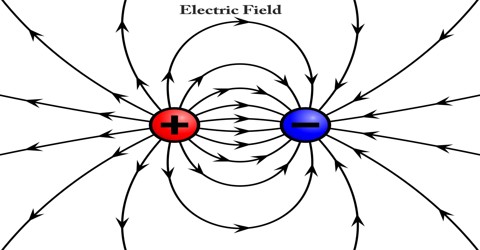 The value of the electric field has dimensions of force per unit charge. In the metre-kilogram-second and SI systems, the appropriate units are newtons per coulomb, equivalent to volts per metre. In the centimetre-gram-second system, the electric field is expressed in units of dynes per electrostatic unit (esu), equivalent to statvolts per centimetre. But for each type always follows some important mannerism as their characteristics or properties. They are-

Electric fields are caused by electric charges or varying magnetic fields. However, since the magnetic field is described as a function of electric field, the equations of both fields are coupled and together form Maxwell’s equations that describe both fields as a function of charges and currents. In the special case of a steady state (stationary charges and currents), the Maxwell-Faraday inductive effect disappears. The equations of electromagnetism are best described in a continuous description. However, charges are sometimes best described as discrete points; for example, some models may describe electrons as point sources where charge density is infinite on an infinitesimal section of space. Electric Dipole is created by two opposite and equal charges, a certain distance apart. It is equal to the product of one charge and the distance between them. Due to this field the dipole will be oriented parallel to the electric field.