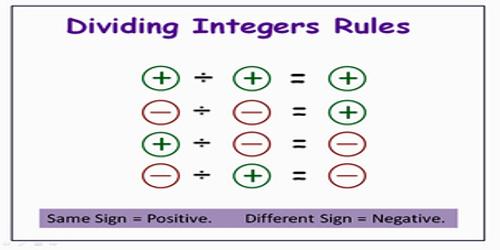 Division of Integers is similar to division of whole numbers (both positive) except the sign of the quotient needs to be determined.

If both the dividend and divisor are positive, the quotient will be positive.

If both the dividend and divisor are negative, the quotient will be positive.

If only one of the dividend or divisor is negative, the quotient will be negative. 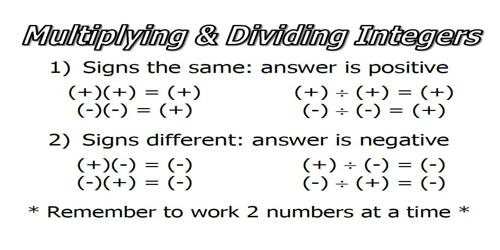 Example 2: This is new – for example, you might have 12/-3. The 12 is positive, but the 3 is negative, so our answer has to be negative. Thus, we divide the numbers as we normally would, and then put a negative sign in front of our answer. So, 12/-3 = -4. Please note that this also works when the negative number comes first and the positive number is second. For example, you may see it written -12/3 = -4, but don’t get confused. The combination of one positive and one negative number, no matter which order they come in, means your answer is going to be negative.

Example 3: This is also new—and doesn’t seem to make much sense, but it is a rule we have to follow when dividing negative numbers. So, for example, we may have the problem -12/-4. Both the 12 and the 4 are negative, so we know our answer is going to be positive. Therefore, -12/-4 = 3.

Define and Discuss on the Binomial

How to Change Hours and Minutes to Seconds?