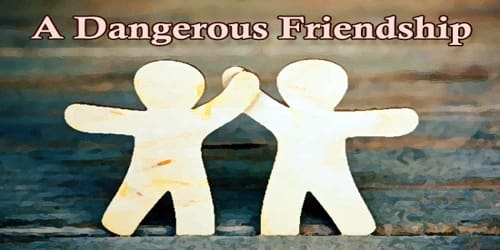 One day, a handsome brown rat met a beautiful frog beside the river. “Let’s go and play,” they said to each other. First, they played hide and seek among the rushes. Then they played football with a fit cone. By the time they were exhausted and lay down for a rest the score was nineteen all.

Next, they decided to have a three-legged race against their shadows. The frog tied one of his legs to one of the rats. Once they were used to it, they ran twelve races against their shadows, but however fast they ran it was always a dead heat. “Let’s try once more,” said the rat. They had just started when a hawk came swooping down.

Terrified, the frog leaped into the river with a squawk and dived to the bottom. His new friend was drowned and, since they were still tied together, the rat’s body floated up the surface pulling the frog with it. “Delicious,” croaked the hawk as he swallowed them both. “Two meals for the price of one.”