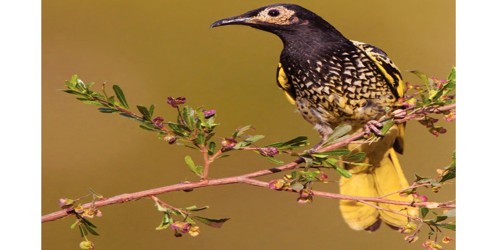 In the land, we know as Australia, spring is arriving as it does each year at this time. But in this land, before any living thing existed, there was a time known as Dreamtime. In the beginning, in Dreamtime, giant beings rose up out of the empty plains where they had slept for thousands and thousands of years. The giant beings began to explore the countryside.

As the Dreamtime heroes wandered, they camped, made a fire and dug for water. They fought, and loved, and sang and danced. And in the Dreamtime, everything we know today was created — the spears, the wooden dishes, the grinding stones, the food, the ceremonies. That is why the aboriginal people of Australia say, “As it was done in Dreamtime, so it must be done today.” And all that happened in Dreamtime still happens today.

Byamee taught all the birds how to build nests, when to lay their eggs and when their eggs were to hatch. He taught the parents to feed their young until they were able to fly, and he commanded them to follow his guidance so that the world would grow and thrive. All the birds obeyed Byamee’s lessons. All, that is, but the cuckoos.

“We do not want to build nests or raise our young,” the cuckoos complained. “We want to sit in the trees and sing and sing. Listen to our song.” And then the cuckoos sang. Everyone agreed their song was beautiful. Even Byamee agreed, for he had made the cuckoos’ song, and everything that was made in Dreamtime was beautiful.

After a while, the other birds grew angry with the cuckoos and complained about their lazy ways. “We work hard to raise our young, but the cuckoos only sing,” the birds chattered.

The birds decided they must call a meeting. They hoped to gather, all together, to convince the cuckoos to follow Byamee’s plan. “Otherwise,” the birds argued, “no one will care for the cuckoos’ young, and the rhythm of the world will be broken.”

The birds came from everywhere. First, the other birds of the bush arrived — the willy-wagtails and the honey-eaters. Before long the birds of the air — eagles and crows and swallows — joined them, and soon afterward the waterbirds arrived.

The cuckoos sat on branches in the trees, surrounded by the pelicans and ducks and emus and all the others. Some of the other creatures stood nearby, hoping to hear the news of cuckoos’ rebellion. The kangaroos hid behind trees; the koalas and possums hid in the leaves; the platypus and Tasmanian devil hid beneath bushes. They were all silent. They waited to hear what the birds would say to the cuckoos.

“You must build your nests,” the willy-wagtails cried.

“And feed your young,” added the swallows.

“You must work as we do,” said the pelicans.

The cuckoos listened, but when all the other birds were silent, the cuckoos called, “No. We want to sing!” With that they began once more to sing.

“Stop your singing!” cried the emus.

“Stop, stop, stop,” echoed the others.

But the cuckoos went on singing. The other birds were furious, but still, the cuckoos sang.

When they reached the north, the cuckoos, out of breath, landed in the trees. They stopped to catch their breath, and then, once more, they sang.

The others stopped too, and they stared angrily at the cuckoos. “Here is where you will stay,” they cried. “You must not return to our land in the south,” and they turned and flew back to their homes in the bush, by the sea, in the air.

From that time on, the cuckoos have always lived in the north. But when spring comes, as it does this time of year in Australia, the cuckoos fly south. They return to lay their eggs in the other birds’ nests. “We will leave the hatching and feeding to the others,” the cuckoos say proudly, and still, when the young cuckoos grow old enough to fly, they follow their parents’ path to the north, guided only by their memories of the way things were in Dreamtime.