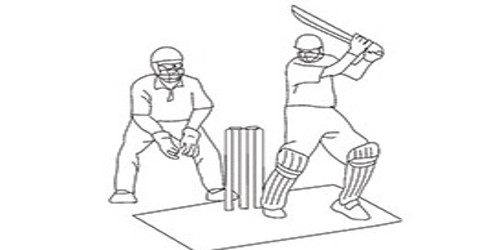 Cricket is a very popular international game. It is believed that this game originated in England. But it is now played in some countries of the world. Now it has become an interesting game in our country.

Cricket is played between two teams. Each team consists of eleven players. A flat round-shaped, smooth, grassy field is needed for this game. Two bats, two sets of stumps and two pairs of bails and a small leather ball are needed. One set of stamps, which are three in number, is fixed just opposite to the other. The distance between them is twenty-two yards. The bails are kept on these stamps, which are called wickets. There are two judges. They are called umpires.

The captain of that team who wins the toss gets the chance to decide whether it will bat first or field. If the toss-winner decides to bat first, the other team will come to the field to bowl. However, when the batting of the first team is over, the second team bats and the first one bowls and fields. At first two batsmen of one party stand at the front of each set of the wickets. One of the eleven players stands behind the wicket who is called wicket-keeper and from the other side who bowls is called bowler. The rest stand in different positions.

The bowler throws the ball with the consent of the umpire. He tries to hit the stumps opposite to him. The batsman resists it by trying to strike hard with the bat. If he succeeds, he and the other batsman run from wicket to wicket until the bowler can catch hold of the ball. The runs are counted. If the ball touches any of the stumps, the batsman is out. If the batsman strikes the ball and if this ball is caught by a fielder, while it is in the air, then also the batsman is out. He may be out in other ways as well. When one batsman is out, he retires and another goes in to bat. The batting continues till the tenth man is out. The other party then takes the bat. The party that scores the greater number of runs wins the game.

The game of cricket is good physical exercise. All the muscles are exercised. It teaches us patience, perseverance, obedience and the value of co-operation. Test matches are played between the two countries. This helps to develop fellow-feeling between the people of these two countries. Though it is expensive, it is the king of the game.