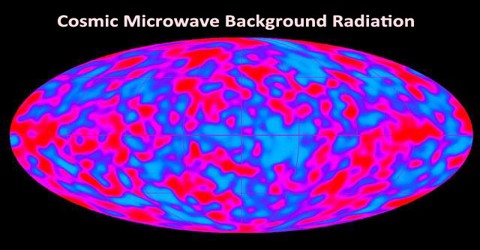 The Cosmic Microwave Background radiation, or CMB for short, is a faint glow of light that fills the universe, falling on Earth from every direction with nearly uniform intensity. It is the residual heat of creation–the afterglow of the big bang–streaming through space these last 14 billion years like the heat from a sun-warmed rock, reradiated at night.

However, a sufficiently sensitive radio telescope shows a faint background glow, almost isotropic, that is not associated with any star, galaxy, or other object. This glow is strongest in the microwave region of the radio spectrum. The accidental discovery of the CMB in 1964 by American radio astronomers Arno Penzias and Robert Wilson was the culmination of work initiated in the 1940s, and earned the discoverers the 1978 Nobel Prize. According to Big Bang theory, temperatures and pressures for the first ~300,000 years of the Universe were such that atoms could not exist. Matter was instead distributed as highly ionized plasma which was very efficient at scattering radiation.

The CMB is the oldest light we can see–the farthest back both in time and space that we can look. This light set out on its journey more than 14 billion years ago, long before the Earth or even our galaxy existed. It is a relic of the universe’s infancy, a time when it was not the cold dark place it is now, but was instead a firestorm of radiation and elementary particles. The familiar objects that surround us today–stars, planets, galaxies and the like–eventually coalesced from these particles as the universe expanded and cooled.

The cosmic microwave background is radiation coming from space in every direction that originated in the Big Bang. As often happens in science, its discovery was completely accidental, and yet it had huge implications for the past and future of the universe. The Origin of the Cosmic Microwave Background

One of the profound observations of the 20th century is that the universe is expanding. This expansion implies the universe was smaller, denser and hotter in the distant past. When the visible universe was half its present size, the density of matter was eight times higher and the cosmic microwave background was twice as hot. When the visible universe was one hundredth of its present size, the cosmic microwave background was a hundred times hotter (273 degrees above absolute zero or 32 degrees Fahrenheit, the temperature at which water freezes to form ice on the Earth’s surface). In addition to this cosmic microwave background radiation, the early universe was filled with hot hydrogen gas with a density of about 1000 atoms per cubic centimeter. When the visible universe was only one hundred millionth its present size, its temperature was 273 million degrees above absolute zero and the density of matter was comparable to the density of air at the Earth’s surface. At these high temperatures, the hydrogen was completely ionized into free protons and electrons. In particular, Big Bang theory predicts certain characteristics for the radiation left over from the birth of the Universe, all of which are confirmed by the CMB:

The multiple scattering of photons by hot plasma in the early Universe should result in a blackbody spectrum for the photons once they have escaped at the epoch of reionisation. This is exactly what is observed for the CMB. The figure on the right plots a theoretical blackbody curve along with CMB data from the Cosmic Background Explorer (COBE) satellite. The agreement is so good that it is impossible to distinguish the data from the theoretical curve.

The photons of the CMB were emitted at the epoch of recombination when the Universe had a temperature of about 3,000 Kelvin. However, they have been cosmological redshifted to longer wavelengths during their ~13 billion year journey through the expanding Universe, and are now detected in the microwave region of the electromagnetic spectrum at an average temperature of 2.725 Kelvin. This agrees well with what Big Bang theory predicts. The cosmic microwave background is polarized at the level of a few microkelvin. There are two types of polarization, called E-modes and B-modes. This is in analogy to electrostatics, in which the electric field (E-field) has a vanishing curl and the magnetic field (B-field) has a vanishing divergence. The E-modes arise naturally from Thomson scattering in heterogeneous plasma. The B-modes are not produced by standard scalar type perturbations. Instead they can be created by two mechanisms: the first one is by gravitational lensing of E-modes, which has been measured by the South Pole Telescope in 2013; the second one is from gravitational waves arising from cosmic inflation. Detecting the B-modes is extremely difficult, particularly as the degree of foreground contamination is unknown, and the weak gravitational lensing signal mixes the relatively strong E-mode signal with the B-mode signal.

The discovery (by chance in 1965) of the cosmic background radiation suggests that the early universe was dominated by a radiation field, a field of extremely high temperature and pressure.