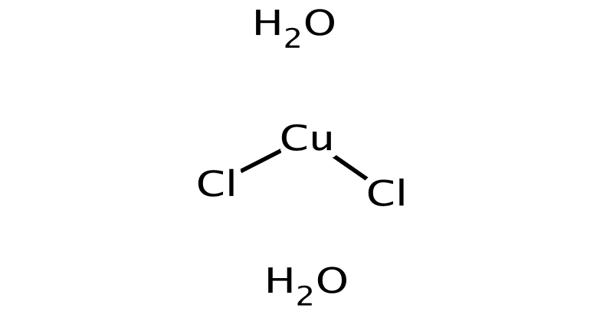 Copper(II) chloride is the chemical compound with the chemical formula CuCl2. It appears as a yellowish-brown powder (the anhydrous form) or a green crystalline solid. This is a green-blue solid, which slowly absorbs moisture to form a blue-green dihydrate. It is an inorganic chloride of copper in which the metal is in the +2 oxidation state. It is corrosive to aluminum and the oxidation state of the metal is +2. It is widely used in printing, dyeing, as a wood preservative, and in fungicides.

Anhydrous CuCl2 adopts a distorted cadmium iodide structure. In this motif, the copper centers are octahedral. It is an inorganic chloride and a copper molecular entity. It contains a copper(2+). Most copper(II) compounds exhibit distortions from idealized octahedral geometry due to the Jahn-Teller effect, which in this case describes the localization of one d-electron into a molecular orbital that is strongly antibonding with respect to a pair of chloride ligands.

Cupric chloride, in its anhydrous form, appears as a yellowish-brown powder whereas in its dihydrate form it appears as a green crystalline solid. In CuCl2·2H2O, the copper again adopts a highly distorted octahedral geometry, the Cu(II) centers being surrounded by two water ligands and four chloride ligands, which bridge asymmetrically to other Cu centers.

Copper(II) chloride is paramagnetic. Of historical interest, CuCl2·2H2O was used in the first electron paramagnetic resonance measurements by Yevgeny Zavoisky in 1944.

It is also commercially practical to combine copper(II) oxide with an excess of ammonium chloride at similar temperatures, producing copper chloride, ammonia, and water:

Cupric dichloride is commercially obtained by chlorination of copper:

Although copper metal itself cannot be oxidised by hydrochloric acid, copper-containing bases such as the hydroxide, oxide, or copper(II) carbonate can react to form CuCl2 in an acid-base reaction.