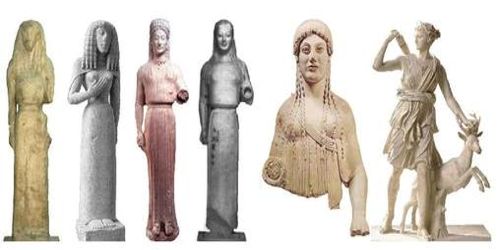 Greek art and sculpture has had a profound effect throughout the ages. Many of the styles have been reproduced and copied by some of what the modern day audiences would class as some of the finest artists to have ever lived e.g. Michelangelo. Western art and sculpture derived from Roman art, while in the East, Alexander the Great’s conquest gave birth to Greco-Buddhist art, which has even had an influence as far as Japan all of which stem from ancient Greek art. The Greeks used many different types of materials in their sculptures including stone, marble and limestone as these were abundant in Greece. Other materials such as clay were also used but due to their brittle nature very few have survived. Greek sculptures are very important as the vast majority of them tell us a story about Gods, Heroes, Events, Mythical Creatures and Greek culture in general. 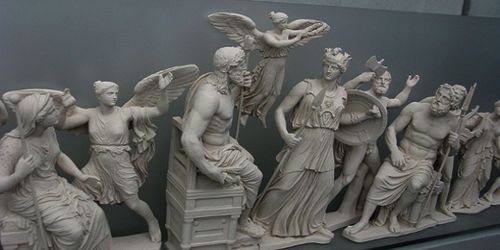 In universal, during this era, Greek sculptors made friezes and reliefs of varying sizes (in stone, terracotta and wood), as well as lot of dissimilar types of statue (in stone, terracotta and bronze), and miniature sculptures (in ivory, bone and metal). Archaic free-standing figures have the solid mass and frontal stance of Egyptian models, but their forms are more dynamic: see, for instance, the Torso of Hera (660–580, Louvre).

From about 620, the three most common statues were the standing nude youth (kouros, plural kouroi), the standing draped girl (kore, plural korai), and the seated woman. (The kouros remained popular until about 460.) To begin with, these figurative works – like most other free-standing Greek sculptures from the Archaic era – resembled Egyptian statues in both shape and posture (frontal, wide-shouldered, narrow-waisted, arms hanging close to body, fists clenched and both feet on the ground, left-foot slightly advanced, facial expression limited to a fixed “archaic smile”). However, as Greek appreciation of human anatomy improved, these kouroi and korai became less rigid and artificial-looking, and more true-to-life, whereas Egyptian sculptors adhered strictly to the rigid hieratic designs laid down by their cultural authorities. 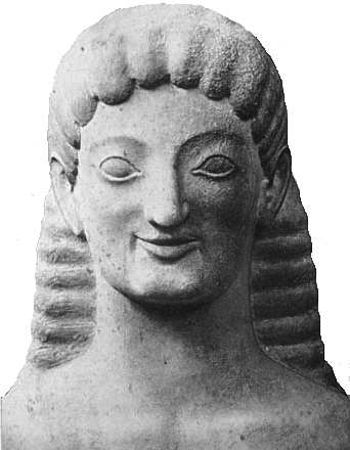 Another distinctly Greek characteristic was that, unlike Egyptian figures, the kouroi had no explicit religious purpose: they might be used as commemorative markers or tombstones, or votive statues, or to portray local heroes like athletes, or to represent the God Apollo or Heracles. The Greeks had long decided that the human body was the most important subject for any artist, and since they gave their Gods human form, they made no distinction between the sacred and the secular. Also, kouroi were nude, while Egyptian male figures were shown clothed.

The female statue, the kore, was seen as less important. In its creation, Archaic sculptors focused mainly on proportion and the pattern of drapery, rather than physical anatomy. Ionian artists were the best at depicting the folds of the loosely draped dress (chiton) and overmantle (himation). Most korai were votive sculptures, standing as dedications in sanctuaries, such as the Acropolis in Athens.

Many of the statues that have survived are actually of Roman origin. Like many people today the Romans had a deep respect for Greek sculptures and many were copied. If the Romans had not made these copies, many of the Greek Legends and stories that we know today would have been lost to antiquity. Greek sculptures are mainly divided into 7 time periods – Mycenaean Art, Sub-Mycenaean or Dark Age, Proto-Geometric, Geometric Art, Archaic, Classical and Hellenistic. 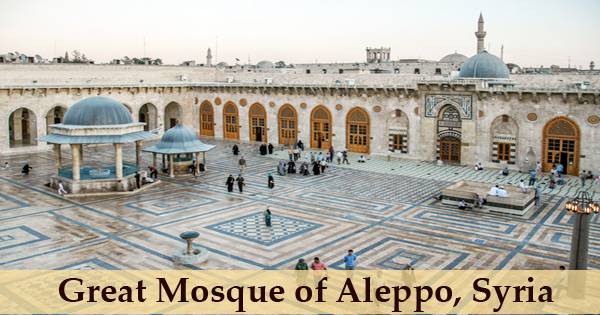 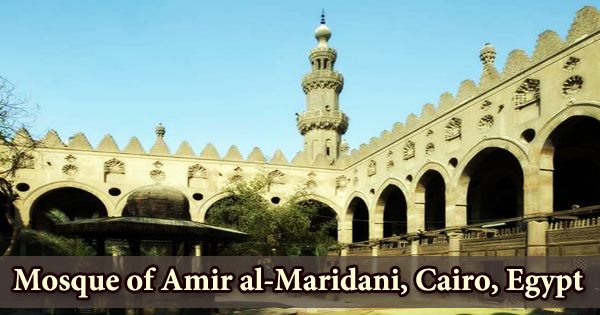 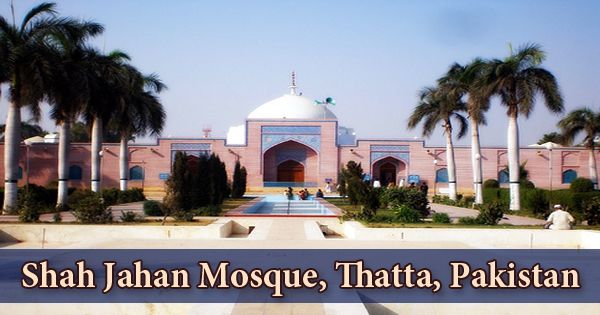