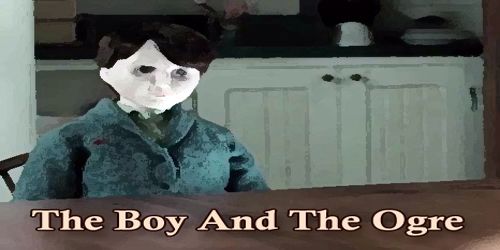 The Boy And The Ogre

Once upon a time a clever lad and a clever fox argued about who was the cleverest. “I can outwit an ogre,” the boy said. The fox laughed. “Oh you can, can you?” “I can indeed,” the boy said, and he set off into the forest.

Before long he came upon an ogre a monstrous creature, huge and horrible-looking. “Goodness, now what will I do?” the boy said aloud, and this was a good question, for ogres love to eat little boys. In fact, ogres love to eat all kinds of people.

But instead of acting fearful, he pretended he did not have a care in the world. “Hello, there, ogre,” he said. “How are you today?”

Now the ogre had been looking for a boy to eat, and when he saw the lad, his mouth began to water. But he fancied a special kind of meal, one he could eat at his table, with plenty to drink besides, and so he said, “I’m just fine, my lad, but I’m a little lonely.”

For a moment the boy felt sad for the ogre, but he was wise enough to know this was a trick. Still, he had some tricks up his own sleeve. He was, after all, trying to prove how clever he was. Here was his chance. So he said, “I’ll keep you company.”

“You will!” the ogre said happily. “Will you come to my home?”

“You’re not afraid of me?” the boy asked.

The ogre laughed heartily. “Afraid? Why should I be?”

“Prove it,” said the ogre, and the boy, who had carefully considered his trick, pulled a block of salt from his pocket. “Watch this,” he said. “I’ll squeeze this rock in my hand and turn it into salt.”

The lad squeezed and squeezed, and soon salt poured from his hand.

The ogre was amazed. “You are strong indeed,” he said. Still, he thought, a strong boy would be as good a meal as a weak one.

Together they set off for the ogre’s cavern. The boy’s imagination was full of the stories he would tell. None of his friends had ever before seen an ogre’s cavern.

When they walked through the entrance, the ogre tossed the lad a thick sack made of oxen hide. “Go fill this with water and carry it up from the stream. Surely a strong lad like you can do that. I’ll start the fire.”

Now the boy wondered how on earth he could carry such a sack filled with water; he was not that strong. But he did not wonder long. He ran down to the stream, and there he dropped the sack on the ground and began to dig a channel.

When the ogre saw this, he laughed heartily. “So, you’re not strong enough to carry a sack of water, is that it?”

“Oh, no,” said the boy, “this is not a question of my strength. I am digging a channel for you so that the water will come straight to your door and save you the trouble of carrying sacks.”

By now the ogre was starving, and he could not think clearly at all. “Never mind the channel,” he said. “Come back to the cavern.”

When they arrived, the boy began to yawn. “I’m terribly tired,” he said. “I think I should sleep before supper.” The ogre’s eyes gleamed. “I’ll just prepare supper, then,” he said, “and after you have slept, we’ll eat. You can sleep there, in the corner.”

By now it was dark in the cavern, and so, the moment the ogre’s back was turned, the boy took a sack of flour from the larder and placed it where he ought to be sleeping. Then he hid in another corner.

Not long afterward, the ogre tiptoed outside and returned with a tree trunk he had hauled out of the ground. With this he smashed the sack, thinking it was the lad. And just for good measure, he lifted the trunk once more and struck another blow, and then another – seven in all.

Then he began to howl with laughter. “Take that,” he said, “and I shall eat you when I wake from a nap.” And with that, the ogre went to sleep, for he was tired from his labors.

The moment the boy heard the ogre’s snores, he began to cry out in his loudest voice. “OGRE! An insect has invaded your house. It must be a terrible insect, for I heard his wings flapping and flapping. Seven times he flapped his wings upon my head. How can we sleep with such a creature flying about?”

Now the ogre was frightened. What kind of boy could withstand seven blows of a tree trunk, thinking them merely insect’s wings? Terrified, he ran from the cavern.

The boy knew he was not quite safe yet, and so he searched the cavern and soon came upon a bow and arrow. He walked outside, prepared to head home to tell his tale. But as he was walking down path, he saw the ogre running toward him, and beside him trotted the crafty fox.

“This fox has explained your nasty tricks,” the ogre said, “and I’ll get you for this.” But the boy aimed the bow and arrow at the fox and shot him dead. “That fox!” he cried. “That’s the very fox who promised to find me an ogre so that I might overcome him with my strength. You must be the one I am to destroy,” and with that, he took aim once more, but the ogre took to his heels and ran away so fast that no one ever saw him again.