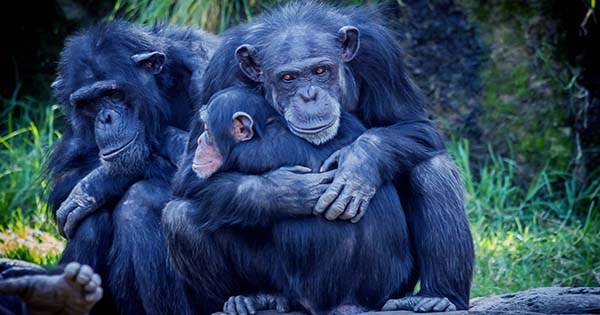 Saying “hello” and “goodbye” is quite standard in human interaction, but such behavior has never been identified in any non-human species before, i.e. until now. New research has shown that chimps have their own way of greeting and saying goodbye to each other, using signals to start and end their interactions. In a new study published in the journal iScience, the “collective commitment” among chimps looked at whether, like humans, they established certain obligations when participating in shared activities.

It is common for social animals to come together, but the research team was looking for signs of entry and exit stages during the Chimp and bonobo hangouts, trying to verify and sharing intentions and making joint commitments was a unique feature for humans, or if it was shared by our closest relatives was done. First author Raphaela Heesen, a postdoctoral researcher at Durham University, said in a statement, “We were able to launch rockets and land on the moon because we have the ability to share objectives, which allows us to achieve much greater than what a single person can achieve.”

“This ability has been suggested to be at the heart of human nature.” The new research team observed interactions between 1,242 natural gamers (above) and captive chimpanzees and captive bonobos separately. They found that the apps would regularly display other communication signals as well as eye contact when interacting with another monkey, starting and ending. They believe that these signals represent the kind of entry and exit stages that people practice when starting and ending a collective commitment.

There were also striking differences between the two species. Bonobos touched the hello and farewell gestures, holding hands, shaking his head, and staring 90 percent of the time before the game, compared to 69 percent for Chimp. They perform their most frequent exit stages, with Bonobos and Chimps scoring 92 percent and 86 percent, respectively. Moreover, compared to chimps, the stages of Bonobos are found to be influenced by their relationship to a particular person, which researchers say could mean that these monkeys can reflect signals in a way that can be compared to human “face management”, a theory that explores by how we can change our expression to smooth out social expression.