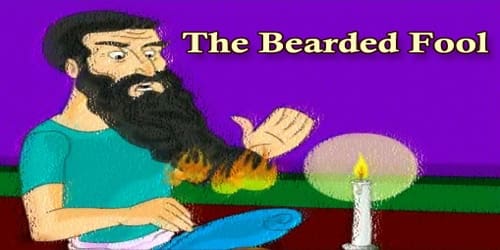 Once upon a time, there lived a man who had a long beard that he was very proud of. Every day, he would clean his bushy beard and comb it neatly. Then, he would stroke his bread, stretching his neck with pride. “My long beard makes me look scholarly and dignified,” he would think and smile himself.

One night, the man was sitting in his house and reading a book by candle-light. Suddenly, he has come across a sentence that read: A man with a long beard is a fool.

At first, he couldn’t believe he was reading it correctly. He blinked his eyes, rubbed them many times, opened them wide, and read the sentence again. It clearly said: A man with a beard is a fool.

At this, the man was very disappointed. He walked up to the window, holding his beard in his hand.

“How can I believe such a remark!” he wondered.

“If it is true, then I am a fool! Oh, what a stupid thought!” he murmured, brushing the suggestion away from his mind.

The bearded man tried to forget what he had read in the book but it kept haunting him. “I always thought a long beard was a sign of intelligence. Was I under a delusion?” The deeper the man pondered, the more depressed he became. “No, no! I can’t take any chances. Maybe what is written in the book is true.”

Finally, he decided to get rid of his long beard. “What is the use of nurturing something that makes me look like a fool?” So, he grabbed his beard in one hand and walked up to the place where the candle was burning.

Then, closing his mouth tightly, he held the tip of his beard to the candle’s flame. It instantly caught fire and began to burn. “Eeeaaaaa!” the man screamed in panic; he had never expected that the fire would spread so fast. Before he realized what was happening, his beard and mustache were burnt to ashes.

Then, a spark leaped up and landed on his head, causing the fire to burn the hair on his head as well. Hearing his cries, the neighbors came running. They splashed buckets of water on the man’s face and put out the fire. “How did it happen?” they asked. The man took a deep breath and said, “I read in a book that a man with a long beard is a fool. And indeed I have proved it!”