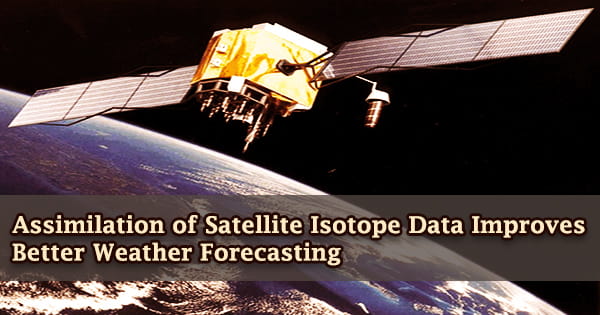 Accurate weather forecasting is becoming more essential than ever as the global climate continues to change and extreme weather occurrences continue to threaten places all over the world. Weather forecasting is the use of science and technology to forecast atmospheric conditions for a specific area and time.

For millennia, people have sought to forecast the weather informally, and professionally since the nineteenth century. Weather predictions are created by gathering quantitative data on the present condition of the atmosphere, land, and ocean, and then applying meteorology to project how the atmosphere will change at a certain location.

In a new study published in Scientific Reports, a research team led by the University of Tokyo’s Institute of Industrial Science claims that incorporating satellite observations of water vapor isotope compositions into a general circulation model can improve weather forecast accuracy by several percentage points.

Individual water molecules are heavier or lighter depending on the hydrogen and oxygen isotopes present, and meteorological activities such as evaporation and precipitation affect the distributions of these isotopes. These isotopes have the potential to disclose the weather system, but due to the relative paucity of isotope data compared to traditional weather measures like temperature and wind speed, they have been largely ignored in meteorological models.

Weather warnings are crucial forecasts because they safeguard people and property. Agricultural forecasts based on temperature and precipitation are critical, and traders in commodities markets rely on them. However, advancements in satellite technology have enabled this gap to be filled and predicting abilities to be improved.

The researchers used data from the Infrared Atmospheric Sounding Interferometer (IASI), a satellite-based spectrometer that measures water vapor isotopes twice a day in the mid-troposphere between 60°S and 60°N. The measurements were taken at an altitude of 4.5 kilometers since this was the most dependable height for isotope measurements.

The model data must be translated into weather forecasts that are intelligible to the end-user by humans. Humans can add information to the prediction by using their understanding of local impacts that are too tiny for the model to resolve. Several nations rely on government entities to offer predictions and watches/warnings/advisories to the general public in order to safeguard lives and property while also preserving business interests.

At both the global and local scales, experiments were undertaken to see how adding this isotope data influenced the modeling of other meteorological factors. The worldwide experiment revealed that model competence has increased, particularly in the mid-latitudes and in the Northern Hemisphere. The majority of meteorological variables, particularly air temperature and specific humidity, exhibited superior modeling.

The researchers looked at a low-pressure event that happened over Japan in April 2013 to test the model in a local environment. The model was better able to predict the overall pressure pattern of this event with the water vapor isotope data added.

According to study senior and corresponding author Kei Yoshimura, “Ours is the first study to assimilate real satellite observations of water vapor isotopes with a general circulation model and examine the effects on the modeling of both global and local dynamics. With the improvements we observed, and with the increasing availability of satellite isotope measurements, we expect further improvements to weather forecasting in the future based on isotope data.”

The severe weather alerts and advisories that the national weather agencies issue when severe or hazardous weather is predicted are an important element of contemporary weather forecasting. Severe weather warnings and alerts are disseminated by the media, including radio, and emergency systems such as the Emergency Alert System interrupt regular programming.