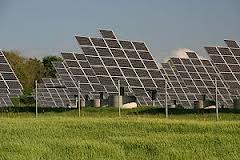 Assignment on Photovoltaic system and Inverter

A photovoltaic (PV) system consists of a PV array and a number of balance-of-system (BOF) components, necessary for making the solar power ready to use. In general a PV installation is configured as shown in figure (30).

A PV array generated DC power with a variable voltage and current. It is possible to supply DC load directly from the PV array. Direct coupling of PV array and load is typically applied for application that exhibit intrinsic storage capabilities like water pumping and cooling system. If Ac loads are to be supplied, an inverter is required, transforming the DC power from the PV array to AC power at prescribed voltage and frequency.

In case the PV array does not directly supply a load, a storage device is needed. Mostly this is a battery but other technologies such as flywheels, compressed air, superconducting coils, double-layer capacitors, redox-flow batteries and hydrogen are currently explored or already applied [60].

Such stand-alone systems are not connected to stiff mains. A way to increase their reliability of supply without additional storage equipment is to combine PV with other types of power generators as for example a diesel gen-set, a small gas turbine, or a wind energy converter. Such systems are called hybrid system. An extended hybrid system consists of several spatially distributed loads and generation unit is often also referred to as micro grid.

This work focus on grid connected PV systems of up to approximately 100 kW rated power. The systems are usually connected to the low-voltage distribution grid. Unlike Large PV power station, they are mostly applied buildings or other structures. Today, grid-connected PV systems always supply the maximum available power while voltage and frequency are determined by the mains. They are cheaper than stand alone systems and easy to operate, as they required no storage equipment.

In terms of power systems engineering, these systems are referred to as distributed or embedded generation unit.  A definition proposed in [62] reads:

“Distributed generation is an electric power source connected directly to the distribution network or on the customer site of the meter.” Embedded generation is a new phenomenon in power system engineering. In the past there was a clear division between highly centralized power generation and highly distributed power consumption. The power flow was one-directional from the generator to the consumers. With the introduction of embedded generation, a bidirectional power flow becomes possible. As a consequence, distribution system operators (DOSs) have to copy with many new aspects of power system management and safety.

This document provides an overview of the state of art of photovoltaic system technology with a focus on systems connected to the low-voltage grid. The basic terms for the assessment of solar radiation are introduced and the most important system components are described. Finally, a number of system-related technical barriers to the large-scale application of grid-connected photovoltaic are identified.