There are several areas where anger and anxiety coexist. Both emotions send powerful hormones into your system, which then result in physical discomfort. Both can be set off by typical events. Your mental habits can help or hurt both of these things. The individual who is trembling with anxiety appears very different from the blustering, angry guy with the red face. But those who struggle with either often have much in common.

Anxiety and anger can be a toxic combination. Here the some of the ways they overlap:

Those prone to anger or anxiety have a small emotional range

Or often no emotional range. You’ve met them, folks whose go-to emotion is anger: They get frustrated, they get angry; they get tired, they get angry; they get scared, they get angry; everything turns into anger, and they are unaware of the emotions underneath. The same can happen to people who are prone to anxiety; they may find it difficult to recognize feelings other than dread and a sense of overwhelm. The drawback of having this wiring is that it makes emotional connection challenging because they not only miss out on the information that these other emotions provide, but other people also perceive them as one-dimensional.

One can drive the other

Many people who to me for anger management actually have underlying anxiety issues. They will acknowledge to being worriers and are typically hyperalert due to coping mechanisms they developed years ago to deal with a volatile or tense home. Instead of responding to stress in “flight” or “freeze,” they choose to “fight.” Additionally, anxious people can mistakenly believe they are angry when they are actually worried since they, too, have a limited emotional range.

It’s easy to get tunnel vision

Angry or anxious individuals can be controlling

Both of themselves and others. Self-control can manifest as rigidity; these people live by a lot of shoulds and stick to strict routines in order to deal with their underlying worry. But they can be controlling of others for the same reason: If I can get you to do what I think you should do, I’m not so anxious. When others don’t make accommodations, the upset people become agitated and upset, while the anxious people become more overwhelmed, nervous, and push more forcefully.

Both can be self-critical, internalize emotions

Internalizing their sentiments and suppressing their thoughts and feelings, especially the ones that upset them, is a frequent trait of anxious and angry people. This puts them in a situation where they will eventually blow up under pressure if they are prone to rage. People who are anxious often blame themselves or give in to what other people desire, which might result in periodic outbursts or melancholy. For both, there is frequently a critical voice berating them for their errors or for failing to act as they ought to.

Given these shared characteristics, managing anxiety or anger requires developing the same skills:

Track anxiety or anger to catch it earlier

I suggest to clients that they check in with themselves every hour to gauge their emotional state. When someone’s emotions reach a three or four on a scale of one to ten, with one meaning they are fine and okay and ten meaning they are out of control, they should reflect on what is happening.

Is there a real problem they need to pay attention to and fix? If there is, they need to take decisive action. If there isn’t one they can identify, they need to do emotional first aid to calm themselves go for a walk, breathe deeply, be mindful, and do something that gets them out of their head: the more tools, the better.

When you get anxious or angry, stop and ask yourself what else you might be feeling besides the anxiety or anger hurt, scared, tired, hungry, sad, lonely? You probably won’t be able to answer the question for the first few hundred times, but just by asking it, your brain is being rewired. If you feel another emotion, express it by telling the person you are wounded, taking a nap, going out to lunch, or calling a friend. The action will help ground the new emotion.

This is also a case of self-awareness being able to recognize it when you start to exert control over people and become agitated when they don’t behave the way you expect. It’s important to practice self-control and communicate your worries to the other person rather than telling them what to do. By discussing your worries with them, you may avoid making them feel judged or micromanaged and they will have a better understanding of your personality.

Work on your internalization and self-criticism

Try taking the risk of speaking up and being aggressive if you frequently hold things back, make allowances for others, or otherwise wall yourself off from them. By empowering you to take charge of your life and avoid letting your anger build up to a point where it explodes under pressure, this will help you reduce your anxiety. Additionally, it will increase intimacy in your relationships and lessen any sense of isolation or “you against the world” thinking you may experience.

Finally, push back against that critical voice that’s always scolding you. Only by treating yourself better can you then do the same with others.

Because anxiety and anger share so many characteristics, anti-anxiety drugs can also be used to treat anger. Because treatment relies on learning the same skills, therapy can provide the coaching you need to rein them in. 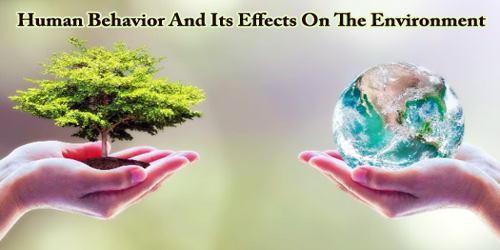 Human Behavior And Its Effects On The Environment